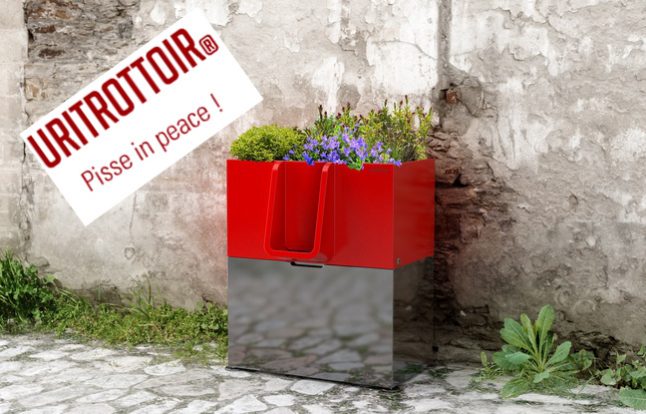 Photo: Faltazi
Like in many cities around the world, men urinating in the streets can be a problem in Bern, particularly on weekend nights.
Last month neighbouring France came up with a solution to its own street-peeing problem by installing so-called ‘uritrottoirs’ at the Gare de Lyon train station in Paris, which is often blighted by puddles of pee.
The innovative piss-pot, developed by Faltazi, an urban design firm in Nantes, features a bed of flowers or herbs over a urinal which is sat upon a box filled with eco-friendly wood chips or sawdust.
The wood chips absorb the liquid creating compost that can later be used as a natural fertilizer. The plants on top – which in France included the fragrant herbs lavender and rosemary – help repel nasty human smells.
The uritrottoir is equipped with a sensor that sends a signal over wifi to the system’s maintenance centre when it’s full – after around 600 wees.
Speaking to The Local France last year, co-inventor Victor Massip said the uritrottoir was a solution to what is a big problem in France.
“People are laughing, many of them are amazed, but most agree that it’s a good idea to test out,” he said.
The idea has certainly impressed Bern’s head of security Reto Nause, who told news agencies on Thursday it was an “exceptionally innovative” solution that the city authorities were now considering adopting for the Swiss capital.
Currently on weekends Bern sets up a number of portaloos to deal with the problem, but it costs around 100,000 francs a year to maintain them. In contrast the eco-piss-pots cost 3,000 euros each, according to news agencies.