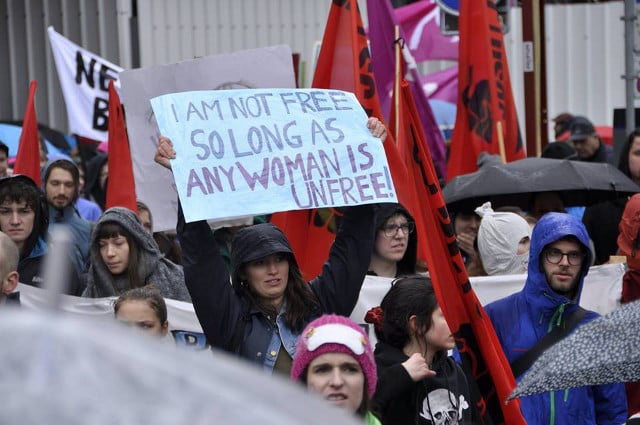 Photo: Women's March Zurich
The event billed itself as a ‘sister’ march to the January 21st marches held worldwide a day after the inauguration of US President Donald Trump.
On that day more than 2,000 attended a march in Geneva to demonstrate in favour of women’s rights and civil rights as a reaction to some of Trump’s campaign rhetoric.
However Zurich was not granted a permit for a march on the same day.
Despite being staged two months later, Saturday’s event had “the same commitment” as the global movement and aimed to highlight “current struggles against inequality” in Switzerland and Europe, said organizers on the event’s website.
“The current political scene in the US and many other countries often strengthens sexist, racist, homophobic, transphobic, islamophobic, and socio-economic inequality attitudes whilst promoting discrimination against people on the basis of age, disability, religion, sexual orientation, gender,” it said.
“We march together for the rights, dignity, and freedom of all, not a few. The Women’s March Zurich stands in solidarity with women’s movements and protests worldwide.”

Proud to march with #womensmarchzuerich today. What a fantastic feeling! pic.twitter.com/GTk1Sx9C9z

According to news agencies more than 10,000 women, men and children – including some Swiss politicians – turned out for the march, many wearing the knitted pink ‘pussy hats’ that have become a symbol of the movement.
The march was peaceful, with police reporting no incidents.