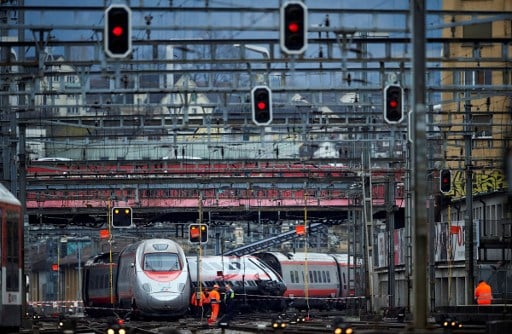 Photo: Michael Buholzer/AFP
Six people were slightly injured when two train carriages of a Eurocity service travelling from Milan to Basel came off the tracks outside Lucerne station just before 3pm on Wednesday.
All those injured – three Italians, one Macedonian and two Swiss – were treated as outpatients and released from hospital on Thursday, said Lucerne police.
It was initially reported that seven people were hurt, however police said that the seventh was injured in a separate incident on the public transport network.
Rail services were initially suspended through Thursday, however SBB has now pushed back the reopening of the station until Monday morning, with the train company’s website citing “unscheduled construction work”.
Speaking to news agency ATS a spokesperson for SBB said the station was expected to resume normal service on Monday but that the repair work was taking longer than previously thought.
The disruption caused chaos for commuters on Thursday. Though SBB laid on replacement buses, travellers were subject to delays.
However many heeded the call to avoid travelling through Lucerne, as there were significantly fewer commuters than usual, the SBB spokesperson told ATS.
An investigation is underway by the Swiss Safety Inspectorate to determine the cause of the derailment.