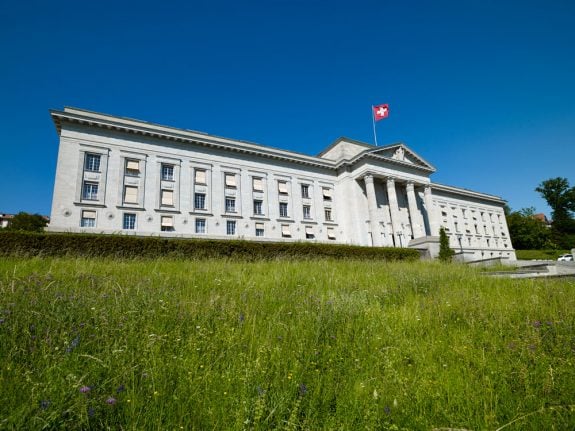 Switzerland's highest court. Photo: Tribunal Federal
On May 21st the Swiss people will vote on the government's energy strategy 2050, a long-term plan that proposes a gradual withdrawal from nuclear power in favour of renewable resources.
The strategy is opposed by the right-wing Swiss People's Party (SVP), which instigated the forthcoming referendum to give the Swiss public the chance to vote against the strategy.
Under Swiss law, anyone can demand a referendum against a new piece of government legislation if they gather the required number of signatures, which the SVP did.
But the pro-environment foundation Greina Stiftung thinks the SVP-led committee lied in its campaign to gather signatures by saying that the government's plans would cost each household 3,200 francs year. The figure quoted by the federal energy office is just 40 francs a year.
In February the environment group called on the Federal Chancellery to cancel the forthcoming referendum, but the case was dismissed.
According to broadcaster RTS the organization is now appealing to the Swiss supreme court to invalidate the signatures gathered, saying the 3,200-franc figure, given as an argument on the petition, violated the Swiss constitutional right to form a free opinion.
“You can’t misuse one of the most fundamental rights that we have, direct democracy,” RTS quotes Greina Stiftung’s director Gallus Cadonau as saying.
“To try and cheat and say that it will cost 3,000 francs [per family] if you accept this law is more than an exaggeration. It’s 80 times more than the true figure. We think we must stop this ‘fake news’”.
If the court decides not to cancel the referendum, it should at least specify the rules regarding the information given to citizens on referendum petitions, says the broadcaster.
If Greina Stiftung were to succeed in quashing the referendum, it would be a first for Switzerland.
No doubt the case would be eagerly observed by Britain, whose Brexit referendum was beset by claims of lying, particularly over the amount of money the country would supposedly save by leaving the European Union.
READ MORE: Swiss to vote on government's anti-nuclear energy strategy
READ MORE: Ten things you need to know about the Swiss political system