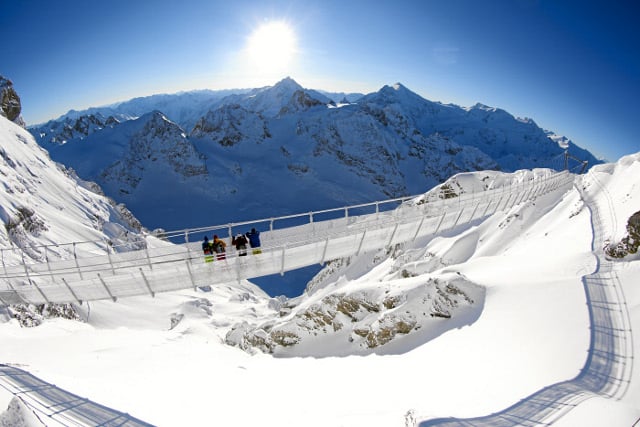 The 'world's scariest' suspension bridge at Titlis. Photo: Oscar Nenander/Swiss Tourism
So it’s hardly surprising that both the country and its residents hold numerous world records. Here are some of most impressive. Know of any others? Let us know in the comments below.
Swiss engineering
1. World’s longest train tunnel: Gotthard Base Tunnel
The Gotthard Base Tunnel opened for scheduled train services in December 2016. At 57km it’s the longest train tunnel in the world. It travels under 2,300m of rock at its deepest point and cuts the journey time from Zurich to Lugano by 45 minutes. However, perhaps even more astounding is that the 20-year construction project for the Gotthard Base Tunnel came in on time and on budget. How very Swiss.
2. World’s steepest cogwheel railway: Pilatusbahn
Photo: Christian Perret/Swiss Tourism
Opened in 1889, this railway near Lake Lucerne winds its way over 4km and 1,635m elevation change from Alpnachstad to Pilatus Kulm, reaching a maximum gradient of 48 degrees. Its max speed is 9km/hr.
3. World’s longest staircase: Niesen
The world’s longest staircase is only open once a year. Located alongside a railway line in the Bernese Alps, it has 11,674 steps stretching over a steep 3.4km. Every June the annual Niesen Treppen Lauf is a gruelling competition to see who is fastest to climb it. The rest of the year, the staircase is closed to the public.
4. World’s first revolving cable car: Titlis
Also near Lake Lucerne,  the Titlis Rotair gondola rotates 360 degrees as it transports sightseers and skiers up to 3,020m altitude.
5. “World’s scariest suspension bridge”: Titlis Cliff Walk
Not one for the faint-hearted, this vertigo-inducing suspension bridge is just one metre wide,100m long and is strung 500m above a glacier. Located at around 3,000m above sea level on Mount Titlis, the bridge was dubbed the “world’s scariest” by a UK newspaper when it opened in 2012. Of course, that’s a matter of opinion…
6. World’s only peak-to-peak suspension bridge: Glacier 3,000
Opened in 2014, the Tissot Peak Walk is a 107m suspension bridge connecting Glacier 3,000 with Scex Rouge, the only bridge in the world to link two mountaintops.
Sport
7. World’s longest downhill ski race: Lauberhorn-Wengen
Held in January, the famous Lauberhorn-Wengen downhill ski race takes place on the world’s longest ski run, of over 4.4km. First held in 1930, the Swiss-televised event now attracts well over one million viewers and spectators each year.
8. World’s longest rowing race: Tour du Lac
The annual Tour du Léman à l’Aviron (Tour du Lac) is the longest non-stop rowing race in the world, covering 160km in Lac Léman (Lake Geneva). The regatta is held in September.
9. Most paragliding championships won by a national team: Switzerland
Hardly a weekend goes by when you won’t spot a bunch of paragliders making their graceful descent from nearby mountains in Switzerland. Look closely and you might even spy a true master, because the Swiss team holds the most FAI World Championship titles in this sport, having won the event seven times between 1991 and 2005.
10. Most men's grand slam singles titles ever: Roger Federer