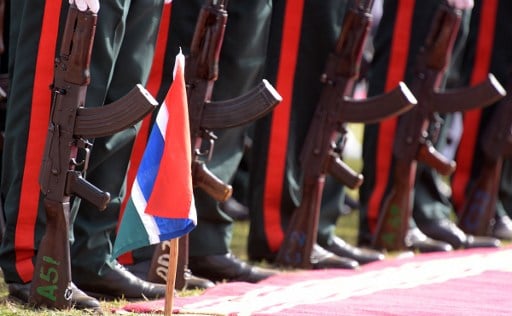 Photo: Seyllou/AFP
Sonko was a top lieutenant of The Gambia's fallen dictator Yahya Jammeh, who was forced from office in January by west African powers after he refused to accept defeat in a December election.
Sonko has been accused of overseeing and committing torture while heading the interior ministry from 2006 to 2016.
He fled to Sweden after Jammeh sacked him in September, before arriving in Switzerland in November.
Swiss authorities arrested Sonko in January and have since interviewed witnesses, seized documents and asked for additional evidence from the new Banjul government led by election winner Adama Barrow.
“In view of the progress made with the investigations, the (attorney general) has applied … for pre-trial detention to be extended by a further three months,” said Linda Studer, a spokeswoman for Switzerland's top prosecutor.
She told AFP in an email that the attorney general's office had taken over the case from local prosecutors in Bern because “crimes against humanity fall under federal jurisdiction.”
Sonko's arrest followed criminal complaint filed on behalf of Sonko's alleged victims by the civil society group TRIAL International.
Extending Sonko's detention “shows the authorities take the allegations against Mr Sonko seriously,” TRIAL's director Philip Grant said in a statement.
Switzerland has jurisdiction in the case because of a 2011 law that obligates the wealthy Alpine nation to investigate anyone on its territory accused of serious international crimes, regardless of where the alleged atrocities were committed.
TRIAL said it was acting on behalf of two people who were tortured by Gambian agents under Sonko's command.
“Ousman Sonko is accused of having personally taken part in these acts of torture”, TRIAL said.
Sending Sonko to The Gambia is not immediately possible, partly because Switzerland will not extradite a suspect in cases where the death penalty could be enforced.
Additionally, the legal capacity of the small west African nation remains limited, with Barrow's government still stabilizing after two-decades of Jammeh's dictatorship.
Url copied to clipboard!