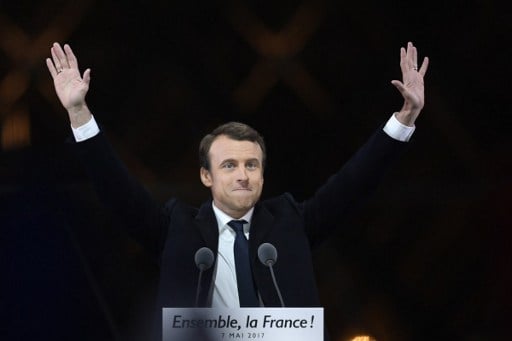 Macron celebrates. Photo: Eric Feferberg/AFP
Swiss President Doris Leuthard congratulated her new French counterpart on Twitter, saying: “Switzerland and France are linked by a common language and by the shared values of freedom and democracy. I am convinced that, on that basis, we will continue to be good neighbours, and that our two countries will pursue and deepen a stable and positive cooperation.”
Federal economics minister Johann Schneider-Amman told tabloid Blick that he had previously met the new president of France and that he found him “open and respectful”.
“I am convinced that our relations with France can be improved even more under a Macron presidency,” he said.
Reaction in the Swiss media to Macron's decisive victory over far-right candidate Marine Le Pen was cautiously hopeful. The election of the pro-Europe former economics minister was a “sign of the maturity of the electorate,” said Le Temps in an editorial, but warned that “nothing will be easy”.
France has entered a new, unknown era, wrote La Tribune de Genève. After the shocks of Brexit and the election of Donald Trump the accession of Emmanuel Macron to the French presidency is a piece of “good news”, said the paper. It stressed the new president is a “risk,” but certainly the “best bet for a crushed France that dreams of changes”.

Socialist party MP Didier Berberat summed up much of the reaction among Swiss politicians when he told news agency ATS he was “relieved that the French knew how to choose between someone who would have led France towards a dangerous adventure, and Mr Macron.”
“Though the result is satisfactory it nevertheless marks an important progression for nationalistic forces,” fellow Socialist Carlo Sommaruga told Le Temps. “That Marine Le Pen managed to convince almost a third of voters after her “catastrophic performance” in the pre-election debate last week, is “worrying”.
“In France at the moment there is a social discontent, even anger, that Marine Le Pen knew how to exploit. … Emmanuel Macron was also elected by a protest vote – and not, contrary to what he wants us to believe, by conviction in a project.”
Macron has a “very hard” period ahead, he added.
Many others pointed to the large number of abstentions and spoiled ballot papers that made Macron president “by default”.
“It’s good news by default,” Pascal Broulis, a member of the Vaud government, told Le Temps.  “But now, everything’s still to do.”
“I’m worried about what comes next… Macron must have a position, and for that he must suggest a real programme, a vision for France.”
Yves Nidegger of the right-wing Swiss People’s Party was harsher, telling Le Temps that Macron’s election “in no way represents hope. He will be the leader of France by default, and Marine Le Pen will become leader of the opposition by default. Emmanuel Macron will be the head of a party that doesn’t exist, and he must find a majority that’s still inexistent.”
Most  agreed that, unless Macron can build a majority in parliament, he won’t have an easy path ahead.
Christian Democrat MP Dominique de Buman told ATS he wondered if Macron had succeeded in creating a “lasting movement” and said it would be difficult for the new president to get a majority in parliament.
Liberal Radical MP Fathi Derder was more positive, telling ATS that if Macron cannot build a majority then he will have to “work as we do in Switzerland, by negotiating point by point. That won’t be a catastrophe at all, it will allow him to reopen a sense of dialogue.”
Switzerland has a large French Diaspora, with over 127,000 people registered to vote in the presidential election in one of 19 polling stations set up on Swiss soil.
READ MORE: For more reaction on the election read our sister site The Local France.