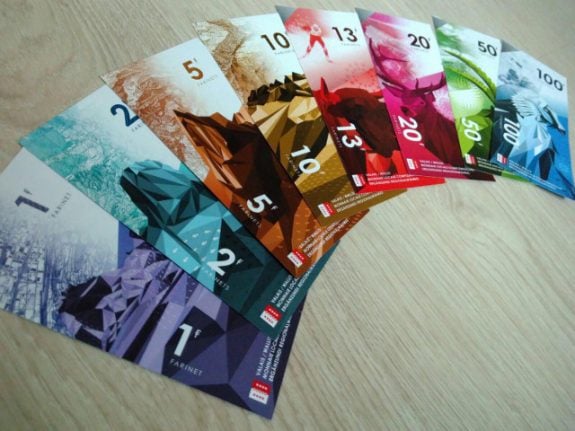 Photo: Farinet/Facebook
The farinet was launched on Saturday in the city of Sion. It comes in eight denominations – 1,2, 5, 10, 13, 20, 50 and 100 – and has the same value as the Swiss franc.
So far around 100 shops and businesses in the canton have agreed to accept the farinet for payment, including cafes and restaurants, small businesses and independent traders.
Shoppers can exchange their francs for farinets in various official bureaux de change including at the tourist office in Sion and the markets of Sion, Sierre and Martigny.
Participating businesses – listed on an interactive map – will accept either full or partial payment in farinets.

The concept of a local currency has existed since the 1980s. By restricting its use to a limited geographical area it encourages shoppers to spend locally, so boosting the local economy and favouring small businesses and artisans.
The farinet is the Switzerland’s second local currency after the léman launched in Geneva in 2015.
The léman is equivalent in value to the euro and can be used in more than 200 participating businesses in the Lac Léman region including Lausanne and neighbouring France.
Around 5,000 local currencies exist worldwide, including the Brixton pound and the Bristol pound in the UK and the eusko in the Basque country.