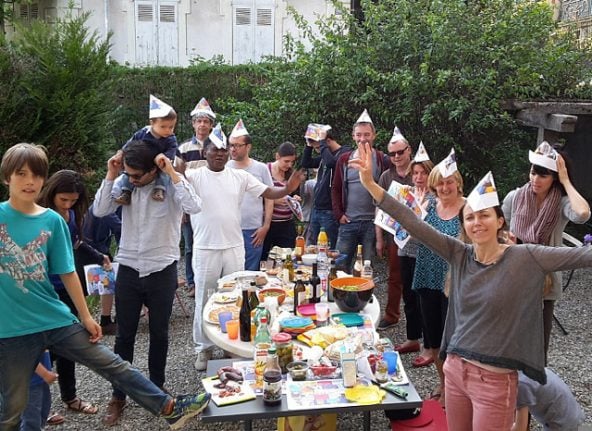 Silly hats: a good way to break the ice with your neighbours. Photo: Lausanne Neighbours' Day
What is it?
Invented by a Frenchman in 2000, European Neighbours' Day is a Europe-wide initiative aiming to bring neighbourhoods closer together and “reconnect with the values of solidarity, brotherhood and friendship that should be at the forefront of neighbourly relations,” says the event's official website.
The day serves as a reminder that “it's good for you to have a friendly relationship with your neighbours”, according to Barbara Albrecht, from the Neighbours' Day organization team in Zurich and St Gallen.
“People have a lot going on in their lives, but taking time for your neighbours is always a good way to spend time.”
What happens?
The idea is to get together with your neighbours for a few drinks, a barbecue, a street party or a family-friendly picnic. Gatherings are organized by individuals, though many local authorities provide advice and kits to help people get started or promote their event.
Who can take part?
Anyone! Some 30 million people in 36 countries now participate every year. The first Swiss Neighbours' Day (fête des voisins/tag der Nachbarn/festa dei vicini) was held in Geneva in 2004, and now around 40 towns and communes in the country promote the idea. It's particularly popular in French-speaking areas.
There’s nothing going on in my area…
So why not organize one yourself? “Ours first took place in 2007 with a simple note in the foyer of the building, asking if anyone would be interested in a little picnic in the park,” Lausanne resident Sally O’Brien told The Local last year.
And for foreigners who often bemoan the difficulties they face in getting to know the Swiss, Neighbours’ Day is a great way to overcome that social barrier. After all, as O’Brien says, “Nothing loosens up the Swiss quite like an apéro!”
For information and support, find your local organizers here.