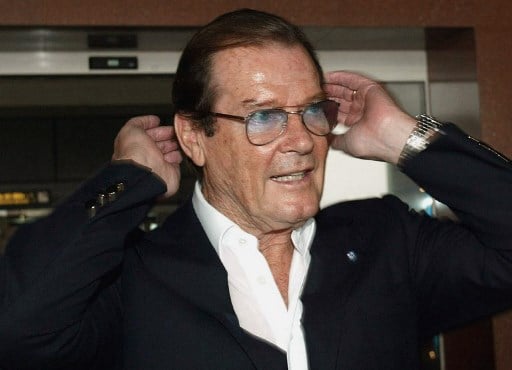 Photo: Hoang Dinh Nam/AFP
The actor, who was best known for playing James Bond and The Saint, passed away “after a short but brave battle with cancer,” said a statement from his children posted on their father's Twitter account.
“Thank you Pops for being you, and for being so very special to so many people,” they said.

With the heaviest of hearts, we must share the awful news that our father, Sir Roger Moore, passed away today. We are all devastated. pic.twitter.com/6dhiA6dnVg

Moore played Ian Fleming’s famous spy 007 in seven films between 1973 and 1985, bringing humour and charm to the role along with a firm twinkle in his eye.
He was already famous from his roles in 1960s television series The Saint and then The Persuaders.
He was also a goodwill ambassador for Unicef, whose executive director Anthony Lake paid tribute to the actor in a statement.
“With the passing of Sir Roger Moore, the world has lost one of its great champions for children – and the entire Unicef family has lost a great friend. In his most famous roles as an actor, Sir Roger was the epitome of cool sophistication; but in his work as a Unicef Goodwill Ambassador, he was a passionate – and highly persuasive – advocate for children.”
Moore had spent much time in Switzerland over the years and had homes in the mountain resorts of Gstaad and Crans-Montana.
In a 2015 interview with Paris Match, Moore said he first fell in love with Switzerland in 1971 and that he loved the country “…because it is quiet, it's not at all show business. Once a year [my wife and I] are asked to put a long dress and a tuxedo… Otherwise, the social life is minimal and it suits me perfectly.”
In accordance with his wishes Moore will be buried in a private funeral in Monaco, where he also had a home.
Url copied to clipboard!