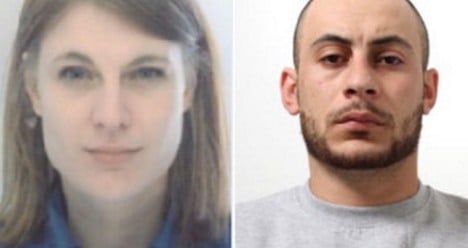 Magdici and Kiko. Photo: Zurich cantonal police
Syrian prisoner Hassan Kiko, 28, broke free from the Limmattal jail on February 8th and fled along with guard Angelica Magdici, with whom he had developed a romantic relationship.
After seven weeks on the run, in March Italian police tracked the pair to a building in the Bergamo region of northern Italy and they were arrested.
They had spent a couple of weeks in the town of Romano di Lombardia and were on the point of leaving for the Middle East, a Milan police spokesman said at the time.
Their arrest came just days after they sent a video to the 20 Minuten newspaper in which Magdici, who was married but separated from her husband at the time, apologized to her family and described Kiko as the “love of my life”.
Kiko, sentenced to four years in prison for the rape of a 15-year-old, also appeared in the film to protest his innocence.
In court in Dietikon on Tuesday, Kiko admitted that the idea to escape jail was his, and that he several times asked Magdici to help him, reported news agencies. However he denied putting pressure on her.
According to the prosecutor, Kiko profited from his romantic liaison with Magdici to influence her to open his cell door.
In defence, Kiko’s lawyer argued for an acquittal on the basis that it was Magdici herself who wanted to free her lover.
However the court convicted him of inciting the guard to free him, and sentenced him to six months in prison, in addition to the rest of his sentence for rape.
In January Magdici was handed a 15 month suspended sentence for helping Kiko escape.