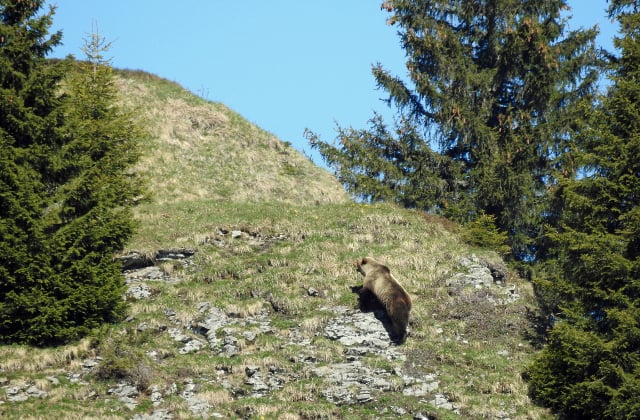 Photo: Hunting inspectorate of canton Bern
However that all changed on Friday when a wild bear was spotted and photographed by a member of the public in the commune of Eriz.
In a statement, the canton’s gamekeeping and hunting inspectorate said it is likely to be a young male bear who can travel long distances in a short time. It is therefore unclear if the bear is still in the region.
It’s possible that it’s the same bear that was sighted several times last year in the neighbouring canton of Uri.
The last time a wild bear was spotted in the canton of Bern was way back in 1823.
“The emblem of our flag has returned – it’s a historic moment,” said inspector Niklaus Blatter.
The inspectorate intends to monitor the situation closely, narrow down the bear’s location and publish recommendations if necessary, it said.
Though this is the first wild bear in Bern for nearly two centuries, bears have been sighted in other cantons in the last decade, probably after walking over from Italy’s Trentino region.
The eastern Swiss canton of Graubünden, which borders Italy, was visited by three bears in 2016, one of whom was killed in a collision with a train in the Val Müstair area.
Another of the three is thought to have moved on to canton Schwyz and then Uri – this could be the same bear that has now appeared in Bern.
Anyone who spots a wild bear should report it to the wildlife inspectorate on 0800 940 100.
More importantly, if you encounter a bear you should stay calm, advises the inspectorate. Don’t approach it and withdraw slowly – do not run.
Captive bears have been held in the city of Bern since the 16th century.
In 2009 they were moved from the old concrete bear pit into a new facility next to the river Aare.
READ ALSO: Geneva dentist treats wolf for toothache