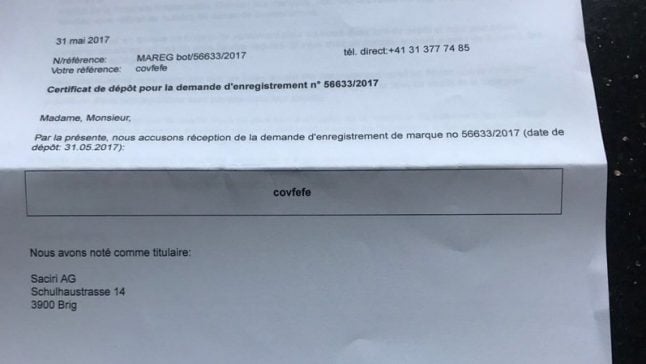 The application to trademark the word. Photo: T. Saciri

The word has puzzled the global Twitter community since Trump added it to the end of a late-night tweet earlier this week.

Who can figure out the true meaning of “covfefe” ??? Enjoy!

Now, if Tim Saciri is successful, the word will be registered under his name and become a Swiss trademark that would apply worldwide – including in the US.

“While Americans were sleeping I lodged my application to patent the word,” Saciri told the Valais newspaper Le Nouvelliste.

The Swiss Federal Institute of Intellectual Property confirmed it had received Saciri’s bid to register the word. It is expected to take three to four months for the application to be processed.

Saciri, an inventor who runs his own firm, is confident of his success.

“I have great plans for the trademark; this will be really good for the canton of Valais,” he told the paper, without revealing any further information.

The Brig resident is the inventor of a dental implant for dogs that prevents them from inflicting serious bite wounds on a victim.