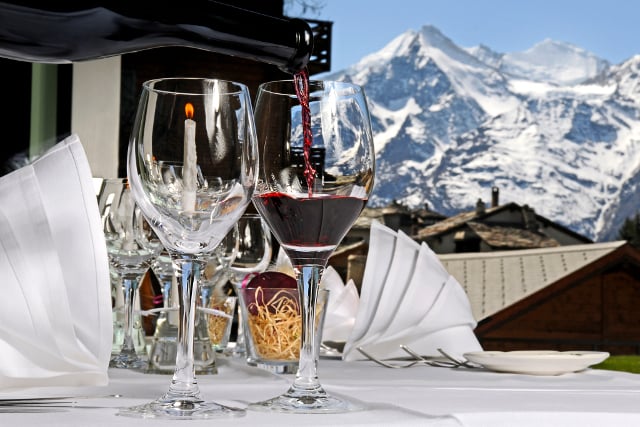 Photo: Hotel Gädi
It's also home to the top three hospitality schools in the world.
So while Switzerland may be criticized for cold service in shops in restaurants, when it comes to hotels, it's a pretty hospitable place.
In late May the country picked its most welcoming hotels for 2017 in the Prix Bienvenue, a tourism award aiming to recognize “outstanding Swiss service quality and genuine hospitality”.
Entrants were selected based on several hundred thousand reviews submitted by guests on 250 online booking platforms worldwide.
In analyzing the reviews, the judges focused not on the hotel’s location and facilities but on the attentiveness of staff, their readiness to help and their ability to anticipate guests’ wishes, Swiss Tourism said on its website.
Coming out on top were these five hotels where you’re guaranteed a warm Swiss welcome.
Hotel Gädi, Grächen – winner, ‘Cosy leisure hotels’ category
Photo: Hotel Gädi
The Gädi is located right next to the Grächen-Hannigalp gondola station in the Valais village of Grächen, perched on a sun plateau on the way to Zermatt. Unlike its more flashy neighbour, this is a down-to-earth place known for its family-friendly activities. The three-star Gädi hotel has a spa and restaurant and says it’s “ideal for skiers, connoisseurs and hikers’.
Rated ‘exceptional’ on popular reservations site Booking.com, customers praised the friendly service, with one saying: “As we arrived we were met by the most friendly couple you could imagine. Nothing was too much trouble and I mean nothing”.
Chasa Montana Hotel & Spa, Samnaun – winner, ‘Larger leisure hotels’
Photo: Chasa Montana
This four-star hotel in the Val Müstair region of eastern Switzerland on the Austrian border has three restaurants, one of which is Michelin-starred, plus a large spa including a jacuzzi in a cave-like ‘grotto’ (pictured).
“The hotel is a wonderful example of a family run hotel. The atmosphere was really warm and family like,” said one satisfied customer on reviews site TripAdvisor.
Hotel Uzwil, Uzwil – winner, ‘City hotels’ Photo: Hotel Uzwil
In the town of Uzwil near St Gallen, this place styles itself as a business hotel but is also well placed for visitors wanting to explore the Old Town of St Gallen, Lake Constance and the Alpstein mountains.
It’s “downright terrific” raved one customer on Trip Advisor, adding: “Once you step inside, there really isn't the tiniest thing that doesn't look spotless, mostly brand new and set out with love and care. We found the staff puts a huge effort into everything they do – and suceed [sic]! Those charming lads literally had us from hello.”
Four Seasons Hotel des Bergues, Geneva – winner, ‘Luxury city hotels’ Photo: Will Pryce/Four Seasons
One of Geneva’s poshest hotels, this place offers visitors a lakefront location, elegant rooms and suites, two restaurants including rooftop Japanese restaurant  Izumi, and a large spa with premium treatments.
One Booking.com customer gushed: “The service was without doubt the best we have ever experienced anywhere in the world”
Suvretta House, St Moritz – winner, ‘Luxury hotels’ Photo: Suvretta House
In the same family since 1912, this fairytale castle of a hotel overlooks the beautiful lake Silvaplana near the upmarket resort of St Moritz in eastern Switzerland. Its facilities include several restaurants, a 1920s-style bar and even a ‘gin club’.
Rated ‘exceptional’ on Booking.com, customers raved about the service, with one saying: “Service by everyone in this hotel was outstanding, from director to bell boys. Nicely run family hotel for those who look for impeccable service, quiet environment and stunning landscape.”