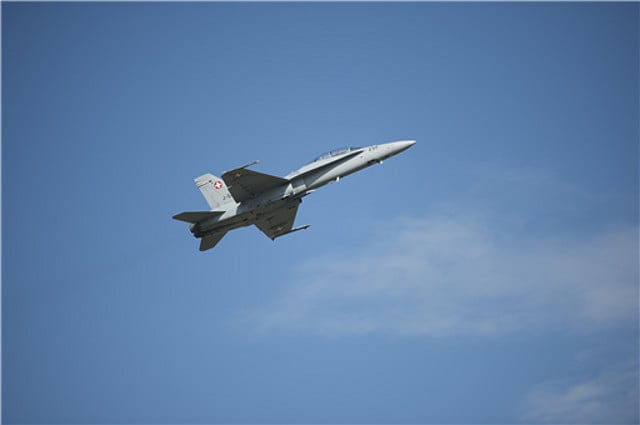 An F/A 18. Photo: Swiss army/ Kaspar Bacher
On October 14th 2015 the F/A-18, one of 32 belonging to the Swiss armed forces, was flying in airspace shared by the Swiss and French for training exercises when it crashed in a field near the village of Glamondans east of the French city of Besançon.
In a statement on Tuesday the Swiss government said the left engine stalled, causing it to lose power. The plane tipped to the left and rapidly lost altitude.
The 38-year-old pilot – the only one on board – was unable to stabilize the plane and ejected a few moments later, said the statement.
“The investigation revealed that the loss of the plane was due to the fact that the pilot ejected without having applied emergency measures required in case of an engine stall”.
He also didn’t carry out – or at least not correctly – the manoeuvres specified when a plane starts to roll or lurch, it added.
“Other reasons, such as a technical breakdown, health problems of the pilot or the intervention of a third person can be ruled out,” it added.
On the basis of this investigation the pilot is suspected of breaking military rules.
Another investigation will now be opened to determine if he also broke criminal laws.
After the crash the pilot was taken to Besançon hospital for treatment of his injuries. No one on the ground was injured.