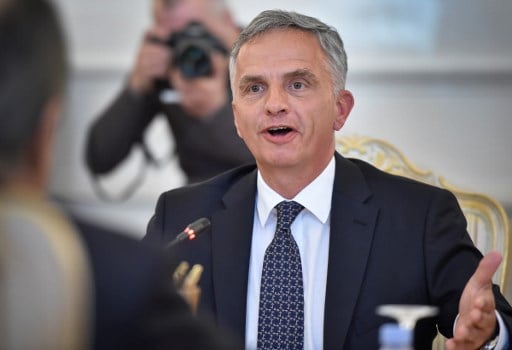 Photo: Alexander Nemenov/AFP
Burkhalter did not say what he plans to do once he steps down, telling journalists the realization that it was time to go had suddenly hit him “like a wave” on Sunday.
In his letter to parliament, he said that “after 30 years of political engagement, including the last eight years in the national government, I naturally feel the need to soon write a new page in my life”.
“I do not yet know which ink I will use, but I think I will use more colours that are more personal and less publicly visible,” he wrote in his letter.
The 57-year-old member of the Liberal Party insisted to journalists that he felt “no bitterness. I just want to do something else”.
READ ALSO: Ten things you need to know about the Swiss political system
He was first elected to government, or the Federal Council, in 2009, first as interior minister before taking the foreign affairs portfolio in January 2012.
In 2014 he held Switzerland's rotating one-year presidency, during which time he was hailed for his role heading the Organisation for Security and Cooperation in Europe just as the Ukraine conflict was escalating.
Burkhalter is a widely respected diplomat who saw his name mentioned as a possible candidate to take the helm of the United Nations when former chief Ban Ki-moon stepped down — a position since filled by Portugal's former prime minister Antonio Guterres.
On Wednesday, he was asked if he might not fill the shoes of Norway's former prime minister Thorbjorn Jagland as head of the Council of Europe, but answered: “I have not asked myself that question”.
“I still have four months left as minister,” he added.
Though he stated his desire to lead a less visible life, his tenure as a politician in Switzerland has been arguably less high profile than those in other countries.
In 2014 a picture of him waiting for a train on a platform, without bodyguards, made waves around the world, with many envying the freedom that Swiss politicians have to move around like any other member of the public.