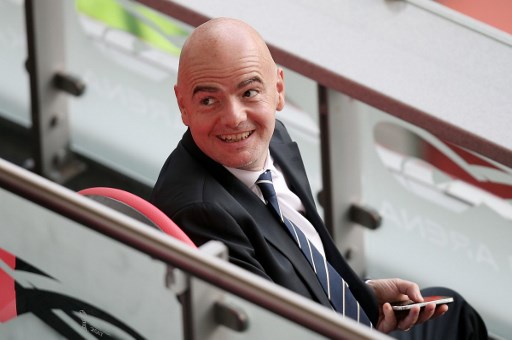 Fifa president Gianni Infantino. Photo: Roman Kruchinin/AFP
Swiss prosecutor Cornel Borbely, who was chairman of the ethics committee's investigatory chamber, had opened an investigation into suggestions Infantino might have sought to influence the election of Madagascar's Ahmad Ahmad as president of CAF in March.
He and Hans-Joachim Eckert, the German former judge, were removed from their posts in May.
Contacted by AFP on Monday, Fifa did not provide any reaction.
The investigation stemmed from evidence provided by African representatives, a source close to Fifa said.
Several African witnesses had been set to travel to Fifa headquarters in the Swiss city of Zurich but at least one of them had their summons cancelled after Borbely was removed from his post, the same source said.
British newspaper The Guardian reported on Sunday that Infantino was being investigated for claims he had promised, along with Fifa general secretary Fatma Samoura, to accelerate payments of development money to national football associations if the presidents voted for Ahmad.
“It is an open secret that president Gianni Infantino and general secretary Fatma Samoura did everything to get the Malagasy Ahmad Ahmad elected,” another source close to Fifa said.
The same source indicated that Infantino wanted rid of previous CAF chief Issa Hayatou, who had not backed the Swiss-Italian when he stood for the Fifa presidency in February 2016.
Cameroon's Hayatou, 70, had been in the post for 29 years and had been censured by the International Olympic Committee in 2011 for receiving money from ISL — the Swiss marketing firm was in charge of rights for Fifa before going bust in 2001.
“The work in support of Ahmad was carried out by the Congolese Veron Monsengo, Infantino's Mister Africa,” said the same source, adding that “it was prepared during a visit by Gianni Infantino to Zimbabwe.”
That visit took place just before the CAF election.
Fifa announced their decision to remove Borbely and Eckert during the organization's congress in Bahrain last month.
Borbely said the decision was “a setback in the fight against corruption” as there were “several hundred cases” of corruption pending.
The duo were replaced by Colombian magistrate Maria Claudia Rojas and Vassilios Skouris of Greece, a former president of the European Court of Justice.