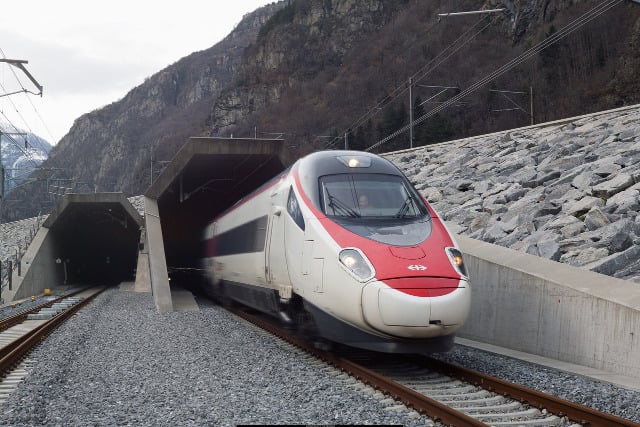 Photo: Dario Hausermann/SBB
The project – called Superveloce – will launch in 2020 on the opening of the Ceneri tunnel, which completes the new rail line through the Alps, of which the Gotthard Base Tunnel is a part, SBB said in a media release on Wednesday.
The longest and deepest rail tunnel in the world, the 57km Gotthard Base Tunnel opened amid great fanfare in June 2016, with passenger services starting the following December.
READ ALSO: What you need to know about the Gotthard Base Tunnel
Since then, the number of passengers on the north-south axis has increased by 30 percent, said SBB.
On average 10,400 passengers a day travel through the tunnel, making a total of 2.3 million since last December.
In addition, 17,000 goods trains have passed through the tunnel since it opened.
However the opening of the Ceneri will allow longer good trains with a bigger capacity to travel on the line.
READ ALSO: Switzerland’s new high speed train unveiled
Despite the success of the line in the past eight months, there are still many challenges, said SBB.
Currently, goods trains are subjected to long delays at border crossings in Ticino and Basel.
“That is one of the main stumbling blocks that SBB wants to resolve in collaboration with their neighbours before the Ceneri tunnel is put in service,” said the company.
International coordination is “imperative” if the north-south axis is to gain in productivity, it stressed.
The punctuality of SBB services is also affected by international services, added the company.
EuroCity trains from Milan often arrive late at the Swiss border, it said, though sometimes SBB is able to make up the time. A replacement train stationed in Ticino also helps the company limit punctuality problems.