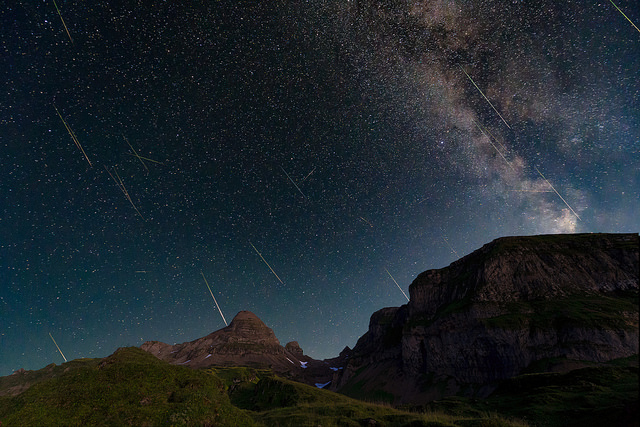 Shooting stars over the Rossstock mountain. Photo: Lukas Schlagenhauf/Flickr
What?
Meteor showers are the dust-filled trails left in the wake of comets. They become visible to us as Earth speeds through their path every year on its way around the sun.
A yearly event in the northern hemisphere, the Perseid shower comprises particles released from the comet Swift-Tuttle. It’s called Perseid because the shooting stars seem to come from the same direction as the constellation Perseus, found in the north-eastern part of the sky.
When?
Perseid is active from mid July to the end of August, peaking around August 10th-14th. The International Meteor Organization says this year’s prime time will be on the night of August 11th-12th, when around 50-75 meteors an hour will be visible in the night sky.

Will the weather cooperate?
Meteor spotting requires clear, dark skies. Currently the weather forecast for the next few days is not playing ball, with cloudy, rainy skies predicted for much of Switzerland from now until Friday. However Saturday looks more promising, though that’s just beyond the shower’s peak.
Unfortunately, even if we do get clear skies, moonshine is likely to interfere, as we’re currently in a waning gibbous phase, having only just passed full moon. MeteoSuisse recommends trying to stargaze when the moon is low on the horizon or, ideally, not yet emerged.
Where?
Get outside and stay away from city lights and other light pollution sources. Try to find an open area unobstructed by buildings and trees to give you the best view – up a mountain would be perfect.
One great location would be Les Pleiades near Vevey in the canton of Vaud, which fashions itself as a star-spotting mountain with its ‘astropleiades' educational trail. The summit should give an unobstructed view of the wide night sky. Or book a night in one of Switzerland's numerous mountaintop hotels or Swiss Alpine Club cabins and prepare to be wowed.

How?
The shooting stars are visible to the naked eye so there’s no need for binoculars or a telescope but allow yourself to become accustomed to the darkness, which usually takes around 20 minutes. And have patience as the shower comes in spurts – you may see nothing for a while and then a sudden flurry of activity.
Prime viewing times are within the hours of 11pm and 4.30am, so be ready for a long night or an extra early morning.
Url copied to clipboard!