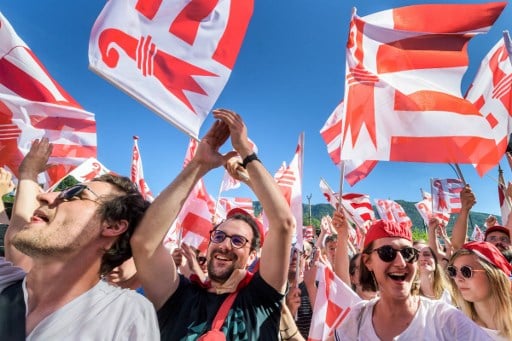 Separatists in Moutier celebrate the outcome of June's vote. Photo: Fabrice Coffrini/AFP
Separatists on Tuesday launched their campaign ‘Belprahon says yes’, saying they wished to follow the neighbouring town of Moutier in joining canton Jura, reported news agencies.
Back in June Moutier made the historic decision to leave canton Bern in a passionately fought and narrowly won referendum.
“We want to accompany Moutier in its Jura future,” Claude Gigandet, member of the Belprahon ‘yes’ committee, said at the campaign launch.
Next door to each other, Belprahon is sometimes considered a part of Moutier, so a cantonal border between the two communes would make no sense, feel campaigners.
Another village close to Moutier, Sorvilier, will also vote on the issue on September 17th, the latest referendum in the hugely sensitive ‘Jura question' that has rumbled on for decades.
READ ALSO: Jura's separatist struggle: why one Swiss village may vote to quit its canton
It was after the Second World War that the French-speaking districts of canton Bern (known now as the Jura bernois) began to feel that the canton didn't treat its francophone minority as political equals.
A separatist struggle was born, and increasing discontent led, in the 1970s, to a serious of referendums on the future of these districts in the canton.
The canton of Jura was created in 1979 to unite those districts who wanted to leave Bern, but at the time only three districts voted to join it, the other four – Moutier, including neighbouring Belprahon, being one – opting to stay with Bern despite their language differences.
But separatist activism continued, and with an increasingly pro-Jura administration in Moutier in recent years, the tide began to turn.
READ ALSO: Moutier's decision highlights Switzerland's cultural divide
In 2013 the Jura bernois voted in another, consultative, referendum. Most regions once again rejected the idea of joining the Jura – except for Moutier, where a majority of people supported it.
It is that referendum which led to the definitive vote on Moutier's future last June.
At the time, commentators thought Moutier’s historic decision may lead other, smaller communes to attempt the same.
And indeed, without Moutier’s ‘yes’ vote, it is unlikely Belprahon would have gone down that route. In the 2013 consultation, Belprahon was divided 50/50, said news agencies.
It will be some time before we will see the effects of the referendums since it is likely to take until 2021 before Moutier can actually join its new canton.