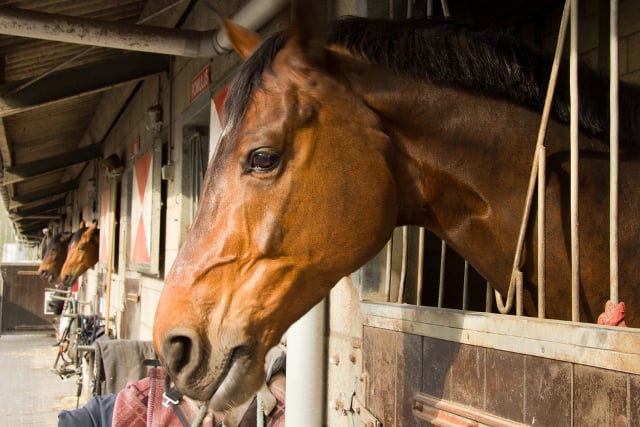 File photo: Tetyanka/Depositphotos
The horses were among some 300 animals seized from a breeder on Monday. Police raided the farm and arrested the breeder after photos taken by a former employee emerged in the media last week which showed mistreated and malnourished horses at the property.
Now it will be the task of the army to help the horses back to good health, the Berner Zeitung reported.
Speaking to the paper, Colonel Jürg Liechti said the canton of Thurgau had asked the army to step in since the Schönbuhl barracks was the only institution in Switzerland capable of caring for so many horses at once.
Its own 50 horses have been moved to another location to avoid any contact with the incoming horses, some of which may have as yet undiagnosed illnesses.
On arrival at the centre some of the 93 horses were unkempt and dirty, Liechti told the Tages-Anzeiger, while others were seriously emaciated. None were shod and their hooves were in a poor state. Others were very nervous.
Their number included several mares and foals, the neglect of which was especially tragic, he added.
The horses are now being attended by 67 army recruits, including 20 with veterinary training, plus four trainee blacksmiths.

As yet it isn’t known where the horses will go once they recover – and that process will take some time. It could be years before some of the animals behave normally, Liechti told the media.
The shocking state of the animals has made headlines across Switzerland since the photos were published in Blick last week.
Demonstrations were held outside the Hefenhofen farm over the weekend in protest at the inaction of the authorities.
Police finally raided the property on Monday after the photos were authenticated.
Speaking to the press after raid, Thurgau interior minister Walter Schönholzer said the property had been inspected several times in recent months, sometimes at short notice, but no evidence of mistreatment had been found.
Now, animal protection group Verein gegen Tierfabriken Schweiz (VgT) has lodged a criminal complaint against Thurgau cantonal veterinary service, reported news agency ATS on Wednesday.
The organization accuses the cantonal authorities of being personally responsible for the animals’ suffering by announcing its inspections beforehand, allowing the farm to dispose of any evidence of mistreatment, such as the bodies of dead horses.
According to the former employee who took the photos, 13 horses had died at the property in recent months.
Url copied to clipboard!