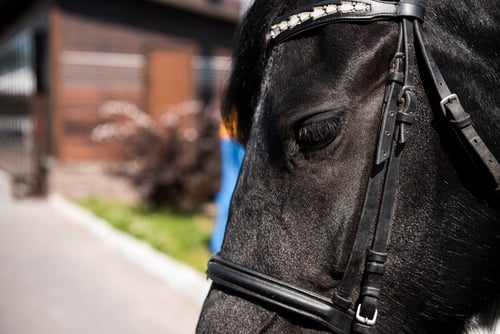 Not one of the horses. File photo:IgorVetushko/Depositphotos

Around 500 people turned up for the auction at Schönbuhl army barracks in the canton of Bern on Thursday, 20 Minuten reported.

It said demand was so great that lots had to be drawn for some of the horses.

The sale was by auction with the maximum price being 500 francs over the animal’s estimated value.

The horses, including foals, were among 300 animals confiscated from the farm on August 7th after pictures published in newspaper Blick showed severely malnourished and mistreated horses at the property.

Since then the animals have been cared for by recruits at the Swiss army's veterinary training centre in Schonbühl.

The defence ministry tweeted earlier this week that the horses were on the road to recovery.

As the army centre could not house the animals beyond August 18th the Thurgau cantonal veterinary service decided to put them up for sale.

Opening the sale, the auctioneer said the aim was to give the animals back their dignity.

The speed of the sale angered some animal welfare groups, including Animal Protection Switzerland (PSA).

The Swiss news agency SDA said animal rights activists had purchased some of the animals, angering private buyers who felt they had no chance.