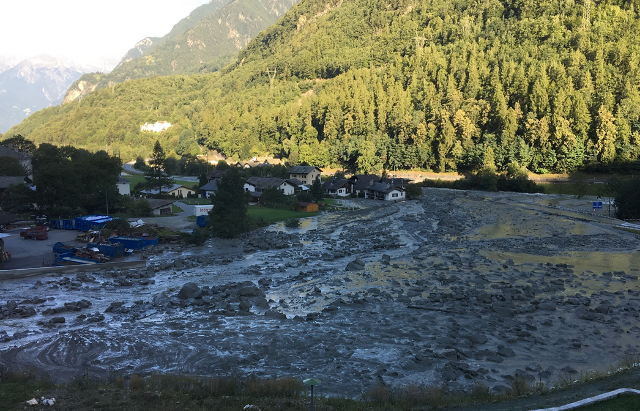 The 35-year-old man and his brother, 32, were descending from the Piz Morteratsch towards the Boval hut when a layer of rock sitting on permafrost came away under the pair’s feet, Graubünden police said.
The younger of the two was able to get himself to safety, but his older brother was swept into a crevasse and buried by the rockfall.
The surviving man was transported by Rega rescue helicopter to hospital, however due to the instable ground it took until Wednesday before rescue workers could excavate the body of his brother from the rubble.
Elsewhere in the canton, 100 people were evacuated as a rockfall swept through the mountain village of Bondo on the Italian border on Wednesday morning.
The rock fell from the Piz Cengalo into a valley behind the village, producing a wave of rubble that travelled down the Bondasca valley, said Graubünden police.
The events triggered the area’s rockfall alarm system – installed after a previous huge rockfall in 2012 – meaning before the debris approached the village the fire service was able to evacuate its inhabitants, as well as people staying at two Swiss Alpine Club cabins nearby.
Some 12 buildings were destroyed by the rock, but no one was injured.
A video captured by a reader of paper 20 Minutes showed the rock sweeping away a building.

The incidents come just days after another rockfall on a popular hiking trail at the Gelmersee injured six people.