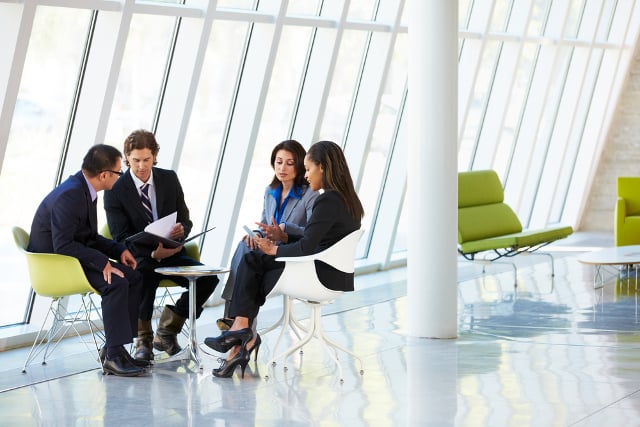 Photo: monkeybusiness/Depositphotos
Unlike foreigners arriving in Switzerland from the EU, who have the right to work here under a bilateral agreement granting free movement, workers from outside the EU – so-called third states – are subject to quotas.
However after the 2014 anti-immigration vote, the Swiss federal government reduced the quota of third-state permits for 2015 and 2016 by a quarter.
The situation worried several cantons including Geneva, which last year ran out of permits by March.
In a letter to the government in August 2016 the Geneva government said it was “extremely worried” that it could no longer offer work permits to highly qualified non-European specialists.
In October of that year the federal government responded by raising the number of quotas available for 2017, however it still fell short of 2014 levels.
In a joint statement on Tuesday, Geneva, Basel-City and Zurich said they had again used up their quota of permits by the end of the first trimester this year, and as a result were demanding that the federal government increase the number available to “at least” 2014 levels.
“The economy and research must be able to call upon specialists from third states,” it said in a statement.
“The low level of quotas leads to uncertainty for the authorities and businesses, which isn’t favourable to our economic development.”
In order for the three cities to remain attractive to businesses in the future, companies and research institutions need to be able to employ high qualified professionals, they said.
While domestic and EU workers make up a large part of the workforce, companies must be able to call on workers from third states, particularly specialists in research and development.
READ ALSO: Where in Switzerland do foreigners choose to live?
Although the cantons have the right to tap into the so-called federal reserve for a top-up if they run out of permits, numbers are limited and therefore don’t always meet the cantons’ needs, said the statement.
The situation means an “increased risk that projects will be moved abroad or that companies decide not to come to Switzerland”.
As well as raising the number of third state permits, the government should simplify access to the federal reserve and allow the possibility for quotas to be increased during the year according to need, demand the cantons.
While they said they supported the idea of national preference in the job market – permits for third state workers can only be issued after it has been proved that the job can’t be filled domestically – non-domestic workers were still needed.
“Easy access to the best professionals at international level remains an essential factor in maintaining the innovation and the competitiveness of our economic and scientific standing,” said the cantons.
Together, Geneva, Basel-City and Zurich make up a third of the country’s economy, with many multinationals situated in these economic hubs.
As a result, all three have large numbers of foreign residents, particularly Geneva, where 40 per cent of its population is foreign (35 percent in Basel-City and 26 percent in Zurich).
There are more than two million foreigners in total living in Switzerland, a quarter of its resident population.
READ ALSO: 14 mistakes foreigners make on moving in Switzerland