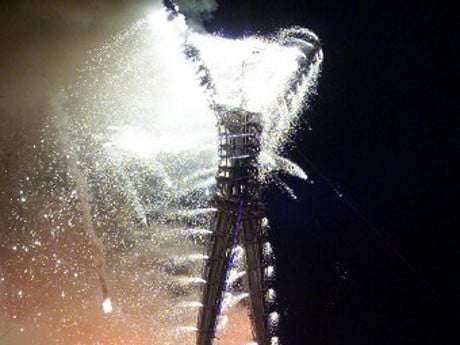 File photo: Hector Mata/AFP
Aaron Joel Mitchell, 41, was attending the annual art and music festival in the Nevada desert known for its ritualistic burnings, including its signature event, the burning of a huge effigy meant to symbolize rebirth.
According to the Pershing County Sheriff, Mitchell broke through a security perimeter and ran into the blaze, reported international media.
Firefighters had difficulty extracting him from the flames because part of the effigy structure was falling, said the sheriff. He was eventually pulled out and airlifted to a burns centre, but later died from his injuries.
On Sunday the sheriff’s office identified Mitchell, saying he was a US citizen who lived with his wife in Switzerland.
Swiss press reported that he lived in the canton of Thurgau.

A man attending the Burning Man festival became an actual burning man after he ran into a massive bonfire https://t.co/tEUHgnEh8c pic.twitter.com/Y19NeoR6v2

In a statement, festival organizers said several subsequent burning events were cancelled on Sunday, but the so-called ‘temple burn’ on Sunday night went ahead.
Emotional support teams were made available to those who witnessed the incident.
Each year some 70,000 people attend the festival, which ends on Monday.

Our community is grieving after an incident during last night’s Burn. Here is our response. https://t.co/kbmd709CLF