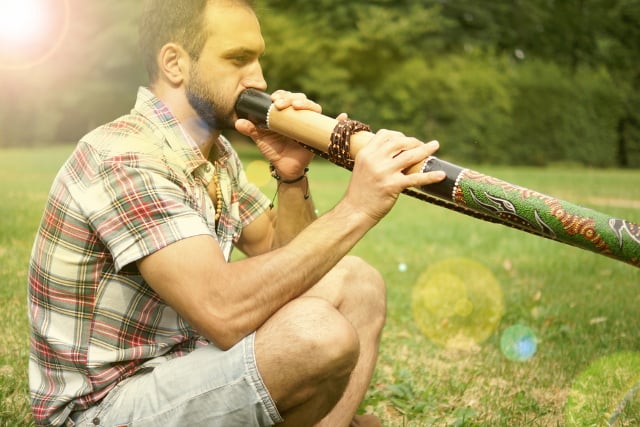 Photo: Giambra/Depositphotos
Awarded on Thursday night at Harvard University in the US, the Ig Nobel is a light-hearted alternative to the famous Nobel prize that recognizes “achievements that first make people laugh, then make them think”, according to the prize’s website.
Milo Puhan, a researcher from the University of Zurich, jointly won this year’s peace prize with his colleagues for leading a study that showed “regular playing of a didgeridoo is an effective treatment for obstructive sleep apnoea and snoring”.
The study dates from 2005, when the team studied the effects of playing the didgeridoo on patients suffering from sleep apnoea.
Half the group of 25 were told to regularly play the Australian musical instrument, while the rest did not. After four months, the didgeridoo players were less tired during the day and had fewer symptoms of sleep apnoea, the university said in a statement at the time.
The project was instigated by didgeridoo teacher Alex Suarez, based at the time in the Zurich Oberland, who found that after several months playing the instrument he snored less and didn't feel as tired.
Why? Because playing the didgeridoo strengthens the muscles in the upper airways that are usually weaker in people with sleep apnoea, said the researchers.
This musical therapy is a much nicer treatment for patients than wearing a nose mask at night, they said.
Whether it would work for players of the Swiss version of a didgeridoo – the alphorn – remains to be studied.
Speaking to 20 Minutes, Puhan said he was delighted to win the Ig Noble ‘peace’ prize.
The lighthearted nature of the Ig Noble prize was appropriate “because that’s exactly what happens when you launch a scientific project. An observation or hypothesis which at first seems hardly credible and makes you laugh. Then, after a time, you ask yourself if perhaps there’s something in it”.
Another Swiss researcher was also recognized at this year’s Ig Nobel awards. Geneva-based entomologist Charles Lienhard was on the team that won the biology prize for discovering a female penis and a male vagina in a cave insect.
Other recipients of prizes included a scientist who created a bra that can quickly turn into a pair of protective face masks, a British researcher who analyzed the question ‘Why do old men have big ears?’ and a team who used brain-scanning technology to measure the extent to which some people are disgusted by cheese.
For the full list, visit improbable.com/ig
The real Nobel prizes will be announced from October 2nd.
READ ALSO: Spanish researchers awarded 'funny Nobel' for discovery that babies 'sing and dance' in womb