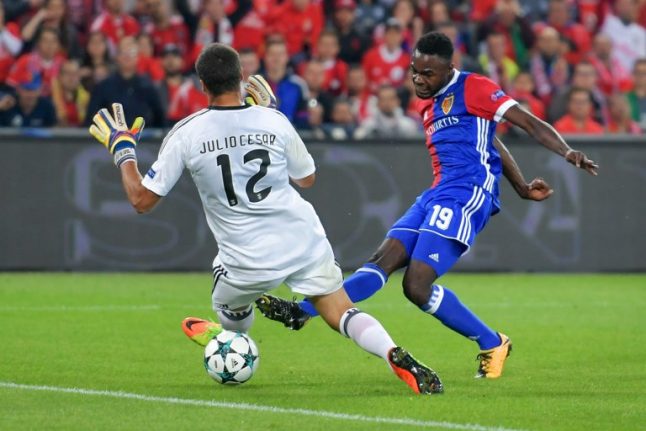 FC Basel 1893 ran out 5-0 victors at St Jakob-Park in Basel against Portuguese side Benfica on Wednesday September 27th in an emphatic and much-needed victory for the Swiss club in the Champions League.

Michael Lang and Dimitri Oberlin gave Basel a two goal cushion in the first half. Ricky van Wolfswinkel then added a third in the second half, before birthday-boy Oberlin doubled his tally. Blas Riveros completed the rout.

Lisbon-side Benfica were reduced to 10-men when Gomes Andre Almeida was sent off for foul play.

“A better birthday couldn't be possible,” Swiss national Oberlin, who turned 20, told Swiss TV station SRF in a post match interview, reports 20min.ch. “This is a very special day for me. Such things don't happen twice.”

'What a night of football!' proclaimed Basel's daily Bazonline.ch's headline in its report about the game. It was the first victory for the Swiss club in Europe's premier club competition for three years, according to the same report.

Oberlin, one of the fastest rising stars of Swiss football, continued to make a name for himself in front of 34,000 spectators on Wednesday, eventually leaving the pitch to a standing ovation. Dimitri Oberlin in action during the game. Photo: Fabrice Coffrini/AFP.

FC Basel 1893 are the reigning Swiss champions and have won the last eight editions of the Swiss Super League.

They now sit second in Champions League Group A with three points from two games. Manchester United top the group with six points from a possible six. FC Basel 1893 face Russian side CSKA Moscow away then again at home in their next two games.