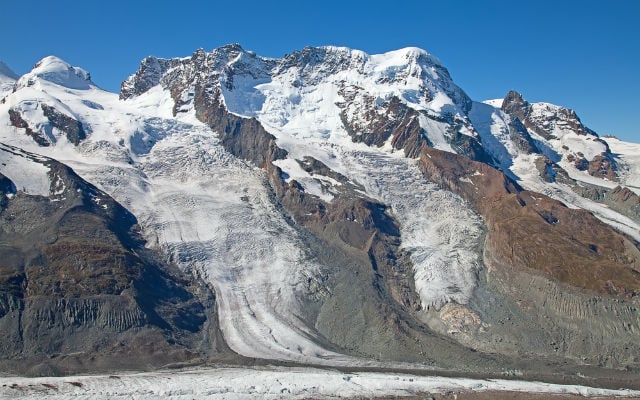 Too wet in the east and the south and too dry in the west. That's the damning report for the 2016/2017 hydrological year, which lasts from October 1st to September 30th.

Higher than average rainfall in some areas, combined with reduced snow in others and drier temperatures overall all further contributed to the depletion of ice in the country's glaciers and peaks, according to a report by Switzerland's national radio service SRF.

In the French-speaking regions of Switzerland, mainly in the south and the west, there was 10 to 20 percent more rainfall from October 2016 to September 2017 than the average in recent years.

But the warmer temperatures in spring and summer were mainly responsible for the loss of ice volume, according to expert David Volken.

Swiss glaciers lost three to four percent of their total volume, but smaller glaciers lost even more, as snowfall was also lower than average during this period.

This year's loss of ice, in what was Switzerland's third hottest year since records began, is being compared to 2003 – the hottest summer on record in Switzerland – when an estimated average of 4.5 percent of ice disappeared from glaciers.

Between 80 and 90 percent of Swiss glaciers could melt by 2100, estimates a specialist from ETH Zurich, according to Swiss daily tagenanzeiger.ch.

Approximately 60 percent of all ice has melted in Switzerland since 1850, claims the same report. Just over 165 years ago there were 130 cubic kilometres of ice; now there are only 54.

Scientists across the border in Italy have also found that the volume of ice is decreasing dramatically. A team from Milan's Polytechnic University used drones to monitor ice on the Belvedere Glacier in the Monte Rosa massif in Italy.

Data from a branch of Zurich's ETH which monitors the change in ice volumes in 120 glaciers in Switzerland shows that 92 out of 120 lost substantial amounts of ice in 2015. Permafrost was also never as warm as in 2016, according to Swiss permafrost monitoring service Permos.