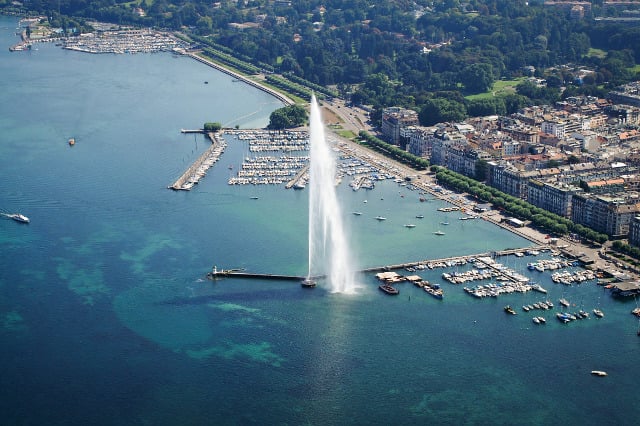 The jet d’eau sprays water 140 metres into the air. Photo: Geneva Tourism
It’s visible from planes flying into Geneva airport, and from the top of the Salève mountain. But why is it there, and how does it work?
1. Created in the 19th century, it wasn’t a fountain at all, but a release valve designed to relieve over-pressure from a hydraulic pumping station that powered the machines of jewellers and watchmakers at La Coulouvrenière. At first it only spouted water 30 metres high.
2. In 1891 Geneva authorities decided to turn it into a tourist attraction and moved the valve to its current position just off Eaux-Vives on the left bank. It was connected to the drinking water system and the water flow increased so the spout climbed to 90m.

3. In 1951 the fountain reached its current maximum height of 140m after it was connected to a new pumping system that took water directly from the lake.
4. Some 500 litres per second of water now flows from the jet, at a speed of 200 kilometres per hour.
5. At any one time, up to seven tons of water are in the air at the same time.
6. Tubes in the specially designed nozzle disperse air into the water, turning it into bubbles and creating the fountain’s white colour.
Read also: Seven fun facts about Switzerland's famous train station clocks
7. It’s managed by the Services Industriels de Genève (SIG) and manually switched on and off by five volunteers who are retired SIG workers.
8. It costs around 800,000 francs a year to run.
9. The jet d’eau doesn’t run constantly. It is switched off at night, in strong winds and in below zero temperatures.
10. In 2016 a new walkway was built out to the jet d’eau, replacing the old concrete jetty built in 1891.
Tours of the jet d’eau run in English and French during summer months. For more information see sig-ge.ch