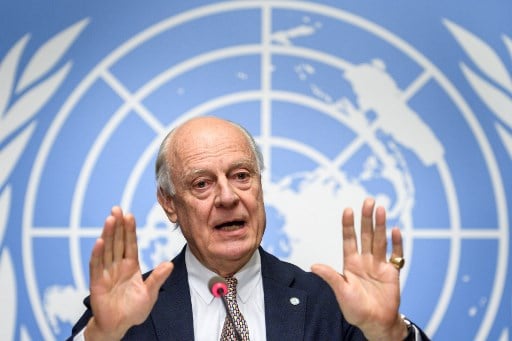 United Nations special envoy Staffan de Mistura. Photo: Fabrice Coffrini/AFP
The meetings, which began on Wednesday, were initially expected to last only two to three days, United Nations special envoy Staffan de Mistura told reporters.
“The atmosphere… compared to the past was professional and serious on both sides,” he said, adding that the talks were now expected to last until December 15th.
De Mistura said they would take a break over the weekend and would return to Geneva to continue the negotiations next Tuesday.
In seven past rounds on his watch the envoy has not managed to get representatives of Syria's warring sides to sit at the same table, instead of shuttling back and forth between delegations.
But on Thursday he said talks were heading in the right direction, with the two sides arriving at the UN in Geneva around the same time, and holding parallel meetings in rooms “just five metres apart”.
These were “very close, proximity, parallel meetings,” de Mistura said.
Syria's government had initially refused to confirm it would attend the UN-brokered peace talks after the rebels signalled they would maintain a hard line on their call for President Bashar al-Assad to be removed from office.
But government negotiators finally showed up after reportedly securing key concessions, including keeping the Assad issue off the table.
The UN mediator told reporters the negotiations so far had not touched on “the issue of the presidency”, and stressed there should be “no preconditions”.
The opposition, united in one delegation for the first time, has stressed it is anxious for face-to-face talks with the government, but de Mistura hinted that could still be a way off.
“Let's be frank: direct contact is good, but what is essential is being able to exchange opinions and shuttling as we do … is good enough,” he said.
Syria's six-year war has claimed more than 340,000 lives, forced millions to flee their homes and left Syria in ruins.
Earlier on Thursday, de Mistura's adviser Jan Egeland told reporters that 500 people, mainly women and children, desperately needed to leave Syria's Eastern Ghouta region, one of the last rebel-held strongholds.
He warned “many of them will die” if they do not receive immediate medical care, pointing out that nine people previously on the UN's list of civilians in urgent need of evacuation had already perished.