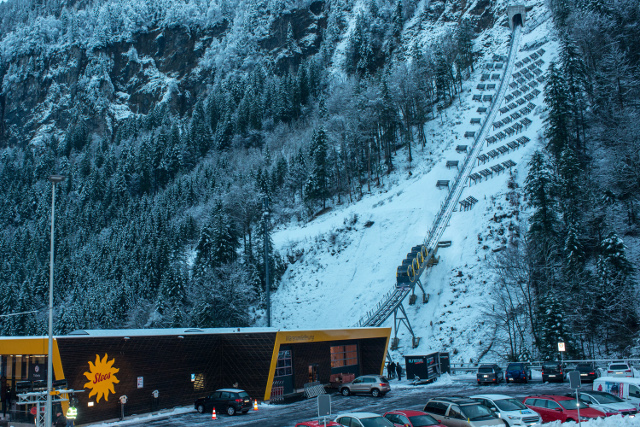 Photo: Stoos Tourism
Swiss president Doris Leuthard officially opened the Stoosbahn on Friday before a weekend of celebratory events in the region including free rides for local residents on Saturday.
The new funicular whisks passengers from the Schlattli valley station up to the village of Stoos, a height difference of 744m.
Despite a maximum gradient of 110 percent, the train's unusual design keeps passengers upright during the four minute journey thanks to its four cylindrical carriages which rotate as it climbs the 1,720m track.
Photo: Stoos Tourism
The funicular replaces an older facility and took five years to construct after financial problems held up the project for two years.
It was budgeted at 43 million francs but costs spiralled to 52 million, according to news agency ATS.
Photo: Stoos Tourism
READ ALSO: 32 incredible world records held by Switzerland and the Swiss
The Stoosbahn is the world's steepest classic funicular railway, meaning a system by which two trains, each connected to a cable, travel in opposite directions at the same time, passing half way down (see film below, at 3m15s). The trains balance each other out meaning only a small amount of force is needed to drive them.
The Scenic Railway in the Blue Mountains, Australia, has a steeper gradient (122 percent) and claims to be the steepest passenger railway in the world, however it does not operate like a classic funicular but is a single train that is winched up and down on a cable.
The top station. Photo: Stoos Tourism
Switzerland is used to record-breaking engineering projects.
It’s also the home of the world’s steepest cogwheel railway (Pilatusbahn) and the world’s longest train tunnel (Gotthard Base Tunnel).
READ ALSO: Eight brilliant things to try in Switzerland this winter