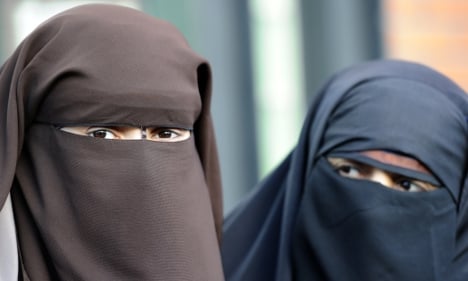 Photo: AFP
Swiss voters will eventually be called to vote on the initiative 'Yes to a ban on face coverings' devised by the Egerkingen committee led by Walter Wobmann, a member of the populist rightwing Swiss People's Party (SVP).
The initiative, which last September garnered more than the required 100,000 signatures to put it to a popular vote, calls for it to be made illegal for anyone to cover their face in public, with some exceptions including for local customs, the weather and health and safety reasons.
Such a law would effectively ban the burqa, though the committee says it is also targeting hooligans and others who cover their face for criminal intent.
With its announcement on Wednesday, the Swiss Federal Council signalled its clear opposition to the so-called burqa ban initiative, and presented a counter measure to compete with it at the polls.
The government “believes it is up to the cantons to determine any possible bans on face coverings in public spaces,” it said in a statement.
At national level, meanwhile, it said it favoured an alternative ban, making it “punishable to force a person to cover their face”.
Although the government did not explicitly mention the full-face Islamic veil, it said the law it was proposing was aimed at showing that Switzerland “does not tolerate coercion of women”.
“No woman should be forced to cover her face,” said the statement.
The government's proposal also stipulated that any contact with Swiss authorities should be done “with an uncovered face, to ensure they know who they are dealing with”.
Reacting to the government's announcement, the Egerkingen committee, which was also behind the controversial and ultimately successful 2009 campaign to ban the building of new mosque minarets in Switzerland, said the Federal Council had missed a chance.
The Federal Council “does not want to see the problem” and its “soft” counter-proposal would not solve anything, Wobmann told the media including news agency ATS.
The original initiative was not just about the burqa but about hooligans and criminals, he said, and rejected the idea that cantons should regulate on the matter themselves.
“We want a clear rule, because it's about our values,” he said.
The SVP also rejected the government's counter-proposal, saying “the key element of the initiative is a rigorous ban on face coverings at national level which gives a clear signal that radical Islam does not have a place in Switzerland”.

Other political parties, including the Christian-Democrats, the Liberal-Radicals and Socialists, welcomed the government's stance.
The Socialist Party may also propose its own counter-project aiming to anchor “true equality between men and women” in the constitution.

The Egerkingen committee “claims to fight for the rights of women by banning the burqa, however this intitiative is nothing but pure poitical symbolism. The initiants couldn't care less about women's rights,” Socialist MP Valerie Piller said in a statement.
The Green Party, however, said the government's counter-proposal was as unnecessary as the original initiative and “reinforces the idea that the burqa is a problem in Switzerland and stokes prejudices against Muslims in Switzerland”.
An inter-party committee formed to fight against the initiative hailed the government's counter-project, said ATS.

In 2016 Ticino became the first Swiss canton to implement a ban on wearing the burqa or niqab in public, with no exceptions for tourists.
Several other cantons have also voted on regional burqa bans, with a handful, including Zurich and Glarus, rejecting such a move.
In November this year St. Gallen's parliament voted in favour of a slightly different bill proposing a ban on any face coverings that present a security risk or threaten social or religious peace.
No date is yet set for when voters will have their say on the federal initiative.
Url copied to clipboard!