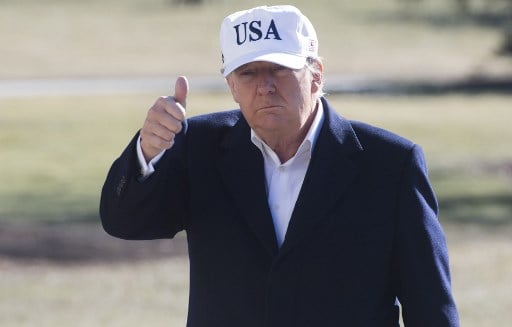 Photo: Saul Loeb/AFP
Trump will become the first sitting US president since Bill Clinton in 2000 to visit the WEF, a high-profile gathering of the world’s political and business elite which takes place this year from January  23rd to 26th.
In a statement on Tuesday, White House spokeswoman Sarah Sanders said Trump would attend in order to promote his ‘America First’ agenda, namely “American businesses, American industries and American workers”.
That seems a direct clash with this year’s WEF theme ‘Creating a shared future in a fractured world’, and indeed the whole ethos of the forum, which was set up in 1971 to help political and business leaders collaborate on global challenges.
Last year’s summit, held around the time Trump was inaugurated, was attended by Chinese President Xi Jinping, who warned against the protectionist agenda pursued by Trump, saying globalization was “irreversible”.
A spokesperson for the Swiss government told Swiss news agency ATS that President Alain Berset would meet Trump if he came to Davos.
“A number of themes could be discussed, on a bilateral and international level,” said the spokesman.
Commenting on the news on its website, WEF said the presence of Trump “will allow participants to get a direct perspective on US political and economic priorities”.
Sitting US presidents don’t generally attend the glitzy summit because mingling with billionaires is not thought to sit well politically back home.
Some 3,000 business leaders, politicians and famous personalities are expected to attend WEF this year, including French President Emmanuel Macron, British Prime Minister Theresa May and India’s Prime Minister Narendra Modi.