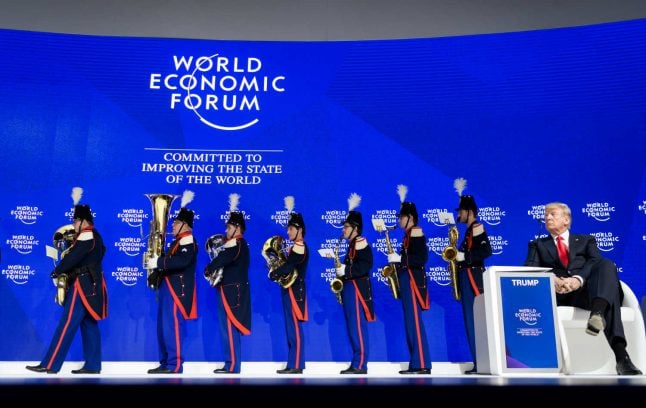 Donald Trump looks on as the Landwehr Fribourg band leaves the stage during the 2018 World Economic Forum in Davos. Photo: AFP

The calm atmosphere established by a brass band at the start of his appearance, and Trump's measured tone during his speech, gave way to a flash of tetchiness afterwards.

“As a businessman I was always treated really well by the press… it wasn't until I became a politician that I realised how nasty, how mean, how vicious and how fake the press can be,” Trump said.

Some of the 1,500 delegates in the packed conference hall booed at those remarks.

The official White House transcript of Trump's speech recorded the reaction to his remarks on the media merely as “laughter”.

Some attendees had also booed earlier when Schwab, who congratulated Trump for his tax reforms as he introduced the president, said some anti-Trump criticism was based on “biased misinterpretations”.

Speaking to reporters earlier as he arrived at the conference centre in the snowbound Swiss resort, Trump had used characteristic terms to reject a bombshell report in the New York Times.

The newspaper cited four anonymous sources as saying that Trump had ordered the firing of Russia investigation special prosecutor Robert Mueller last year, but had backed off when the White House counsel threatened to resign.

Trump dismissed it is “fake news” and “typical New York Times” before entering the hall for his speech.

Once on stage he was obliged to stand grim-faced in silence for nearly four minutes alongside Schwab listening to a solemn march played by a 30-strong Swiss brass band in Napoleonic blue uniforms and white plumed helmets.

In the lobby outside the hall, two demonstrators in white T-shirts protested quietly against Trump.

The Swiss police had banned larger rallies planned in Davos for this week during Trump's visit, though campaign groups projected protest laser messages and unfurled an anti-Trump banner on nearby mountains.

“Listen to him, denouncing fake news. This is what he does,” said one of Friday's two protesters, Anya Schiffrin, a professor at Columbia University and the wife of prominent US economist Joseph Stiglitz.

She wore a T-shirt with a printed slogan reading “Not My President”.

The other demonstrator, Sasha Kramer, wore a T-shirt reading “Stand With Haiti” — one of the countries reportedly targeted in recent foul-mouthed comments by Trump.

“I believe that this forum is about dialogue and I don't think we have been given an option to have dialogue with President Trump,” Kramer told AFP.

“I stand for the friends and colleagues in Haiti who were deeply insulted by his hateful and racist statements.”