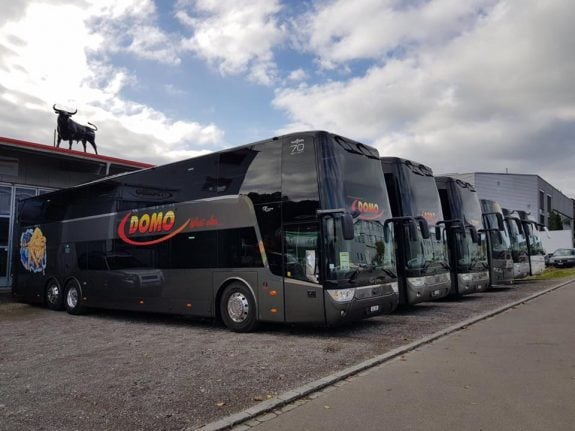 The first of these new lines will cover the route St. Gallen–Zurich–Biel/Bienne–Geneve airport. The second bus line is to cover the route from from Zürich airport to Lugano via Basel and Lucerne while the third line is set to run from Chur/Coire to Sitten/Sion in Valais taking in Zurich and Berne along the way.

Travellers holding either the Swiss halb-tax/demi-tarif rail card or the GA travelcard will be able to use it when travelling on Domo’s new Swiss express services, the company says.

But travel times will be twice as long: Domo will take two hours between Zurich and Berne, while the train takes 62 minutes, for example.

The Swiss Express buses will have first-class and second-class sections, with passengers allowed to carry one piece of hand luggage and one other larger piece of travel luggage free of charge. Passengers can also carry one set of skies or a snowboard without incurring additional costs, according to Domo.

All passengers will have to reserve in advance as there will be no standing room on the services, according to the Swiss transport office statement.

In 2017, a Swiss government report conceded that national long-distance bus services would be feasible in certain specific circumstances. However, under Swiss law, new transport options like that offered by Domo as of next month cannot compete with government-funded transport services to the extent that they threaten their survival.

Monday's announcement from the Federal Office of Transport comes just days afer Toni Häne of Swiss rail service SBB weighed into the transport cost debate, telling Swiss daily NZZ that the abolishing the half-fare card in favour of cutting regular fares for everyone could be “considered” but would need the whole transport industry's approval.

PARTNER CONTENT
Where are you going this summer? Why Malta is the perfect Mediterranean escape
Url copied to clipboard!