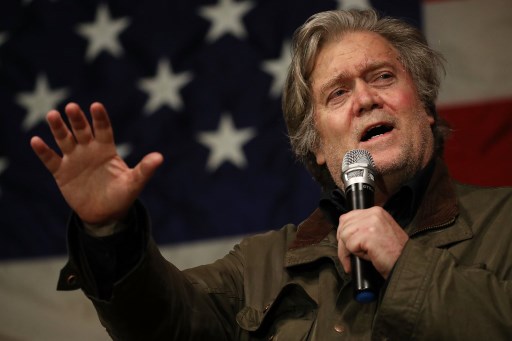 Photo: Joe Raedle/Getty Images North America/AFP
Bannon, US President Donald Trump’s former right hand man and co-founder of far-right US news site Breitbart, will speak in Zurich on March 6th.
The former White House Chief Strategist has repeatedly warned Trump against backing gun control, even after the mass shooting in Las Vegas in which 59 people died and 515 were injured.
Now campaign group Action Together: Zurich, is turning Bannon’s appearance in the Swiss city on its head by raising funds for Everytown for Gun Safety, a leading gun violence prevention organization in the US.
Their online fundraising campaign ‘Don’t Hate, Donate’ is inspired by a 2014 event in Germany in which anti-fascist campaigners hijacked a march by Neo-Nazis to raise money for an anti-extremist organization.
“We wanted to poke a bit of fun at Steve Bannon,” Erin Zimmerman from Action Together: Zurich told The Local. “He is speaking to cause people to be afraid and we want to show this is an opportunity to come together.”
Action Together: Zurich was founded for the women's march in Geneva in 2017 with the aim of preserving the American values they believe to be threatened by Trump's administration.
With their current online campaign, Bannon will be “inadvertently raising money for causes he’s against,” Zimmerman said, adding that they hoped other communities would take up the cause. “We have contacted other groups [in places] where he will be speaking and we just hope our counter campaign will actually do more good from his presence here than any new damage he could cause.”
READ ALSO: 'We are sorry': Americans in Switzerland apologize for Trump prior to Davos visit
Zimmerman, a former police officer in Colorado who now lives in Switzerland, said she thought the US could learn something from other countries when it comes to gun control.
“I’ve lived in places like Australia where there is very strict gun control, Switzerland which has a much more permissive attitude towards weapons and then the US which obviously has the most extremely permissive attitude. There are ways the US can do this better without violating the second amendment. We could learn from Switzerland, we could do this right. But there are mentality differences.”
Referring to the recent school shooting in Florida in which 17 people died, Zimmerman said she was “ashamed” that young people were having to speak out against the gun lobby because adults were not.
“It should not be the responsibility of our children to demand that we protect them,” she said. “We decided we needed to do something so we started this campaign to say it’s time for commonsense gun laws.”
In August 2016 Bannon gave up his position as executive chairman of Breitbart to run Trump's presidential campaign during its final stages.
He was then appointed White House Chief Strategist – a move criticized by both the political left and elements within the Republican establishment concerned about his background with the ultra-conservative Breitbart News.
But Bannon lasted only seven months in the newly-created position and was sacked after allegedly falling out with both the US president, members of the Trump family and other key figures in the West Wing.
He then returned to Breitbart only to be pushed out in January in the wake of allegations in the book Fire and Fury: Inside the Trump White House that Donald Trump Jr had participated in a “treasonous” meeting with a Kremlin-linked Russian lawyer.