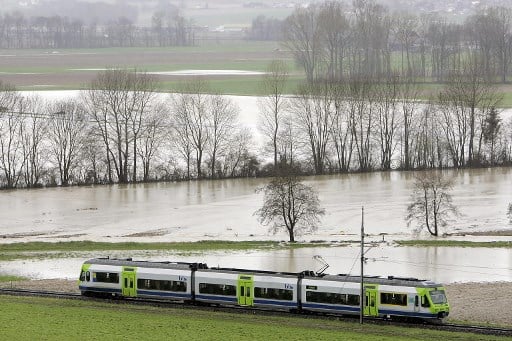 Flooding in Switzerland in 2006. Photo: Fabrice Coffrini/AFP
“Devastating flooding” is a possibility, canton Bern’s head of property insurance Ueli Winzenried told the media, saying he was extremely concerned by the situation.
Cantons should take steps to lower the level of lakes so they can absorb the coming meltwater, he advised, while owners of property in risk areas should empty their cellars and arm themselves with sandbags.
The aim is to avoid a repeat of the situation in 1999, when heavy rain after a snowy winter caused lakes and rivers to break their banks, creating millions of francs of damage.
However it is still too early to know if Switzerland will face the same risks of flooding as back then.
“We are not, for the moment, in the same situation as in 1999,” Philippe Hohl, head of the water division in canton Vaud’s environment department, told 20 Minutes.
In 1999 there was more snow in the mountains and the month of May was extremely rainy, a combination that led to the flooding.
“For the moment we are quite far from that situation, but things can change very quickly in a catastrophic way,” he said.
Places particularly at risk include the Lake Neuchâtel  area, which faced flooding in 2015 after Lake Biel, which feeds into it, swelled with meltwater, and the Rhône valley in the canton of Valais, where residents still remember the catastrophe of autumn 2000 when the river broke its banks and caused vast flooding.
Rain is forecast this week on the Swiss lowlands, turning to snow in the mountains.
Source: MeteoSuisse

It is difficult to imagine Switzerland without its cheese, but the heatwave and lack of water is playing a part in this worst-case scenario, with even the iconic Gruyère under threat.

Usually, Swiss cows spend the summer high up the mountains, grazing on Alpine pastures until they are brought down – sometimes with a bit of local ceremony – from the mountains onto the plain in the fall.

But this year’s heatwave  and drought have disrupted this traditional process – with parched meadows running short of both grass and water, forcing farmers in canton of Vaud to bring their cattle to the lower ground in the middle of summer.

Vaud agricultural authorities estimate that 60 out of Jura’s 200 mountain pastures are “in acute lack of water” and even though the canton is supplying water to the breeders, “the unprecedented heatwave will in any case affect the production of milk and cheese”, Le Temps daily reported.

The situation is similarly dire in the canton of Fribourg, where the famous Gruyère cheese has been produced for centuries.

“The situation is tense, even critical”, according to Frédéric Ménétrey, director of the Fribourg Chamber of Agriculture, who said that 15 alpine pastures that are inaccessible by road are being supplied by private helicopters.

With “lack of water and dry grass”, milk production could be reduced by “20 to 30 percent”, Said Dominique de Buman, president of the Fribourg Cooperative of Alpine Cheese Producers.

This also means that less Gruyère will be made this year and, if heatwaves and droughts become a standard summer weather, “we must reflect on how to adapt the alpine economy and agriculture to global warming”, Éric Mosimann, manager of the Vaud Society of Alpine Economy, pointed out.

READ MORE: How Switzerland is protecting its cheeses from foreign influence

WEATHER
‘Don’t sleep naked’: How to get a good night’s sleep in a Swiss heatwave
Url copied to clipboard!