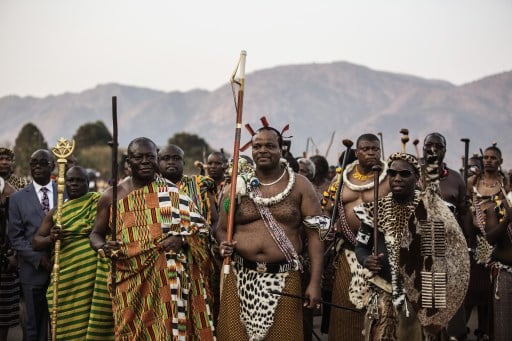 Swaziland is ruled by an absolute monarch. Photo: Gianluigi Guercia/AFP

Landlocked: Both countries are surrounded on all sides by land and have no access to the sea. While this can be an economic disadvantage  – as in the case of Swaziland – it hasn’t done Switzerland any harm.

Read also: Swaziland to change its name – and Switzerland's partly to blame

Small but with big neighbours: Just 200 km from north to south and 130 km from east to west, Swaziland is one of the smallest countries in Africa and is squeezed by South Africa on three sides and Mozambique on one side. Switzerland with a total area of 41,285 km is more than twice the size but still dominated by bigger neighbours France, Germany, Austria and Italy (Liechtenstein is its only smaller neighbour).

Parliament: Like Switzerland, Swaziland has a legislative consisting of two chambers. But not all the seats are allocated according to the results of a popular vote, which takes place every five years. The king also has a role in appointing deputies.

And five ways they are different:

Government: Swaziland is one of the world’s few remaining absolute monarchies, with the king ruling by decree. Switzerland, on the other hand, is renowned for its direct democracy.

Income: With GDP of less than 10,000 dollars per person, Swaziland is classed as a developing country. Switzerland, on the other hand, enjoys per capita GDP of around 61,000 dollars.

Life expectancy:  If you live in Switzerland you can expect to live until you are 83.  By contrast in 2015 Swaziland had a life expectancy of just 51 years.

Health: Swaziland has one of the highest rates of HIV infection in the world with more than 20 percent of the population thought to be affected. In Switzerland the infection rate stands at around 0.3 percent.

Internet: In Swaziland access to the internet is not restricted but few Swazis can afford to go online. In Switzerland around 87 percent of the population were online at the end of 2015.