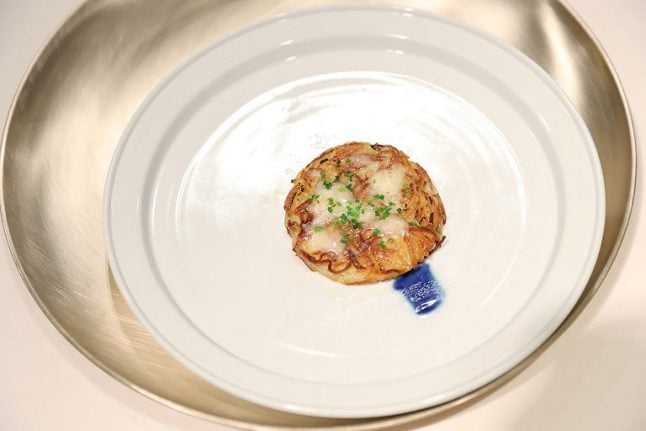 The dish, a staple in Switzerland and popular all over the world, will, however, be given a Korean twist, South Korea’s Blue House said, providing details of a dinner on Friday that will kick off a summit that comes just days after Kim said he would stop nuclear and long-range missile tests during negotiations with the South.

Read also: The Swiss regional comfort foods you just have to try

Rösti, which resembles hash browns, is being served up in honour of the fact that Kim spent part of his youth in Switzerland, the Blue House said.

South Korea will server Kim Jong Un “rosti,” a Swiss dish, during the summit on Friday, confirming on the record for the first time (as far as I know) that the North Korean leader spent his youth in the Switzerland pic.twitter.com/maOzZfgfpP

It is not known whether Seoul is aware of the irony of serving up a dish that has given its name to the supposedly irreconcilable differences between French and Swiss-German-speaking Switzerland. This cultural divide is referred to in Switzerland as the Röstigraben (or rösti trench).

North Korea has never acknowledged that Kim studied in Switzerland but former classmates and teachers have talked about his time in the country.

The fact that the potato dish has been chosen for the dinner menu on Friday may add further fuel to the rumours that Kim Jong-un and US President Donald Trump are to meet in Geneva for talks centred on North Korea's controversial nuclear and missile programme.

But the piece de resistance of the inter-Korean banquet has to be this mango mousse decorated with a map of a unified Korean Peninsula, the summit date and the words “The spring of our people.” The mousse “forms a warm spring energy through cold winter frosts,” per Blue House. pic.twitter.com/LWBx4oQlF8

A week ago, Trump said five sites were being looked at for the summit while US officials have recently floated ideas such as Singapore or Malaysia, the demilitarised zone between the two Koreas and a neutral European city such as Sweden or Switzerland.

Apart from Kim Jong-un’s personal connection with Switzerland, also in the country’s favour as a possible home for the meeting is its long history as a base for high-profile political summits, including on issues related to the Korean Peninsula, as well as the Switzerland’s small but highly symbolic role in ensuring the continuation of the ceasefire between North Korea and South Korea.

A small contingent of Swiss soldiers, along with a Swedish unit – Sweden is also a serious contender for the summit – are based in the South Korean section of the demilitarised zone between the two countries as part of the Neutral Nations Supervisory Commission.