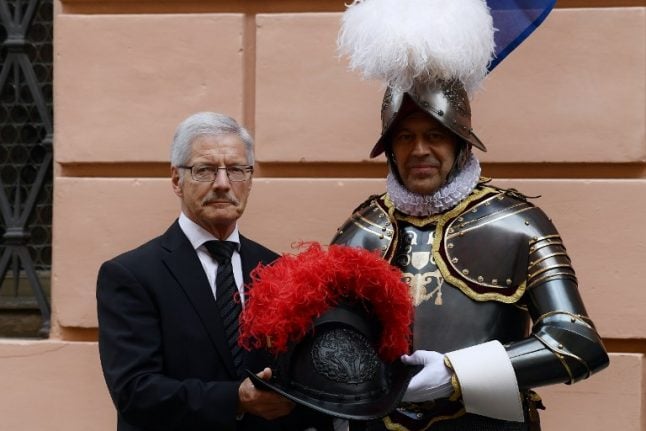 Commander of the Swiss Guard Christoph Graf (R) and the originator of the project Peter Portmann present the prototype of the new PVC 3-D printed helmet for the Swiss Guard. Photo: AFP

The Vatican’s famous Swiss Guard is hoping to get a 21st-century upgrade to its famous headgear in the form of new plastic hats made with a 3D printer.

A prototype of the new headgear was unveiled before the swearing in of 32 new recruits to the elite unit on Sunday.

The 500-year-old papal guard say the printed hats are both cheaper and far more comfortable to wear for long periods than the current metal headgear.

The hats developed by Swiss engineer Peter Portmann have a price tag of between €800 and €900 each – around half the price of the existing version.

An initial run of 40 have already been produced, mostly through donations from private sponsors, and the guard now hopes to raise the money for 60 more hats.

The new headgear would make up part of the Swiss guard’s famous blue, red, orange and yellow gala uniform, created in the early 20th century. They would be used only for ceremonial occasions and serve no defensive purpose.

On other occasions such as night sentry duty, members of the Swiss Guard wear far simpler uniforms topped with berets.

“We have to move with the times,” Guard commander Christoph Graf told the Catholic news agency KNA of the plans. But he noted that uniform changes would only be made if they served a practical purpose.

“We wouldn’t make a halberd out of plastic,” he said, referring to the distinctive two-handed Swiss weapons carried by the pontifical guard.

Members of the Swiss guard must be Swiss, practising Catholics, single and aged under 30. They must have also completed basic training with the Swiss army.

The unit hopes to boost its size from the current 100 to 135 said Graf on Saturday, although the timing is not yet clear.