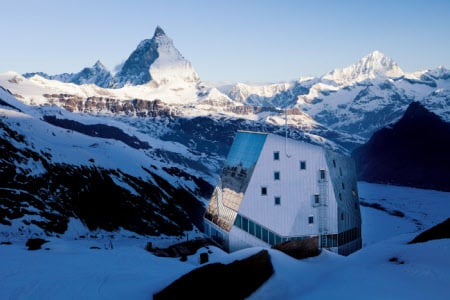 The Monte Rosa hut in from of the Matterhorn. Photo: swiss-image.ch / Christof Sonderegger

The teen, who lived in Winterthur, fell into a crevasse in the glacier and died of his injuries, Valais cantonal police reported.

The son and father had decided to go for a walk in the morning while waiting for a rescue helicopter to take them back down to the valley.

Shortly before midday the teen slipped and fell into the 12-metre crevasse at an altitude of 3,200 metres.

An Air Zermatt rescue team airlifted the youth to hospital where he was declared dead.

According to the police report, the young man and his father had spent the night at the Monte Rosa hut.

The warden there had advised them to break off their expedition and return to Zermatt by helicopter as they were not properly equipped for hiking in the mountain.

The two were wearing shoes with crampons.

The men set out from Zermatt on Wednesday ahead of the Ascension Day holiday, taking the cable car to the Trockener Steg summit from where they walked over the Gorner glacier to the iconic mountain hut.