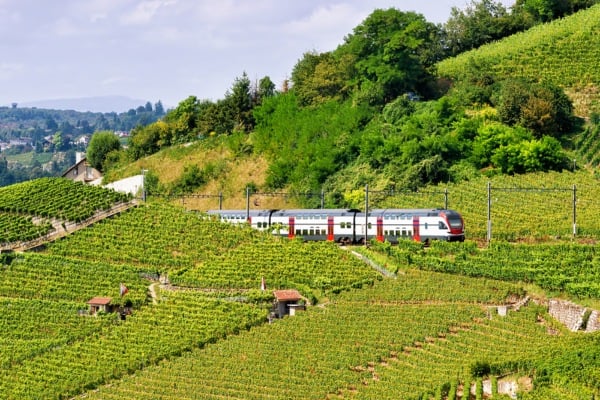 A train passes through the Lavaux Vineyard Terraces on Lake Geneva. Photo: Depositphotos

But Swiss gourmand Josef Zisyadis was shocked recently when he discovered foreign wine had made it onto the new drinks menu of Swiss Federal Railways (SBB/CFF).

“Do they serve anything other than French or Italian wines on French and Italian trains?” asked the director of Switzerland’s annual slow-food Week of Taste festival after seeing the options available.

The SBB website shows six different wines – three reds and three whites – are currently on offer. Just half of them are Swiss.

The whites include a Fendant from the canton of Valais, a Chasselas from Vaudois and a Spanish Verdejo. On the red side of the list, there is only one Swiss wine: a Merlot from Ticino. The other two are a French Bordeaux and a Primitivo di Manduria from Italy’s Apulia region. There are no Pinot Noirs or Blauburgunders within spitting distance.

“It’s bizarre. It wouldn’t be too much to ask to see the six wine-growing regions of Switzerland represented on the SBB,” Zisyadis told Swiss daily Le Matin recently, referring to the areas of Valais, Vaud, German-speaking Switzerland, Geneva, Ticino and the so-called Three Lakes region.

The one-time politician in the lower house of the Swiss parliament noted that ten years ago, Elventino, the company which provides catering services on Swiss trains, had actually been a sponsor of the Week of Taste.

“Now the wine list shows the rootless politics of the SBB – disconnected from our soil,” said Zisyadis.

“A train is not just a place where you pay to travel. For Swiss people it’s a link between different regions, and, for tourism, a place to promote unique products,” he added.

Research by Le Matin shows French and Italian trains do indeed only sell national wines but the SBB has defended itself saying: “We want to give our clients the most diverse food and drink offering possible, while at the same time focusing on Swiss specialities on our InterCity and EuroCity trains.”

In the meantime, Zisyadis is ready to step into the breach and help Elvetino. “Their menu could be a real representative showcase of Swiss heritage,” he said.