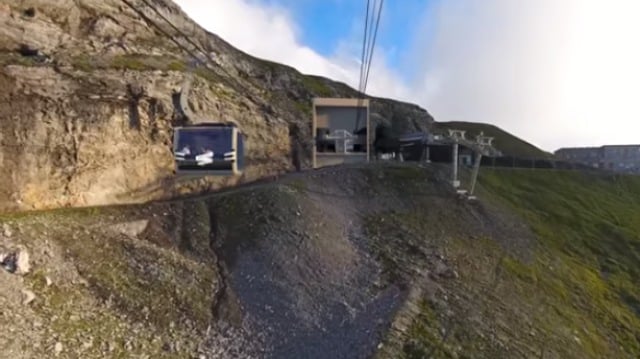 At 3,454 metres above sea level, the Jungfraujoch station is the highest in Europe and is a hugely popular destination for foreign tourists: over a million people used the station in 2017, up 13.6 percent on a year earlier, thanks in part to its popularity as a destination among Asian tourists.

Currently, rail tourists travelling to the station from the Grindelwald Grund railway station must first take the train to Kleine Scheidegg and then change for the Jungfraujoch service.

Under the new plans, however, a new a V-shaped cable car will shoot visitors from the village of Grindelwald straight up to the Eigergletscher train station where they can then join the Jungfraujoch train.

Plans for the new cable car up to the Eigergletscher station were first announced in 2012 but opponents objected on the grounds the project would disfigure the landscape.

They also said the plans would affect tourism in the villages of Grindelwald, Lauterbrunnen, Wengen and Kleine Scheidegg, all of which would be bypassed by what would essentially be a new express line from Interlaken to the Jungfraujoch station.

The Prevent the Eiger Express protest group argued the cable car link would “turn the trip to the Jungfraujoch into a fast-food experience and would torpedo the long-term success of the Jungfraubahn” by favouring mass tourism over quality offerings.

After lengthy negotiations, The Federal Office of Transport responded to objections by ensuring modifications including shorter pylons and colour-camouflaged cabins.

Meanwhile, project planners say the arrival of the cable car link will see the creation of more than 1,000 hotel beds in the commune of Grindelwald alone.