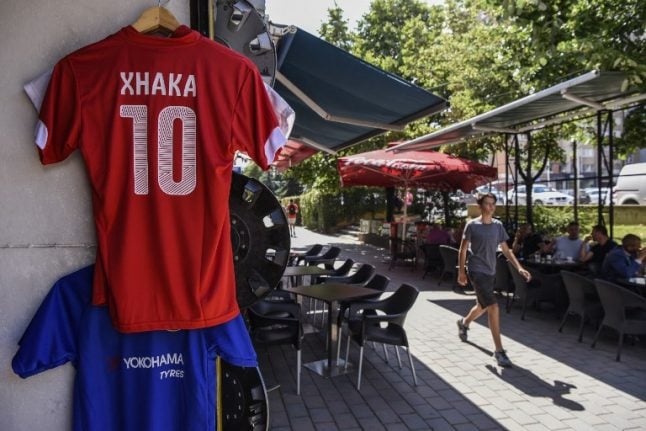 A replica football jersey of Switzerland's midfielder Granit Xhaka outside a shop in the Kosovo capital Pristina. Photo: AFP

Midfielders Valon Behrami of Italian club Udinese, Arsenal's Granit Xhaka and Xherdan Shaqiri of Stoke City were all born in Kosovo and all three played in Switzerland's surprise 1-1 draw against Brazil.

Along with Bologna's Blerim Dzemaili, born in neighbouring Macedonia, Albanian-speaking players made more than a third of the starting line-up against Brasil.

The children of immigrants to Switzerland, they have not commented on Friday's match in Kaliningrad which could be decisive for qualification from their group.

Only Shaqiri commented, when the groups were draw in December, saying: “Hmm, I like this draw.” However, relatives of the players make no secret of the symbolic importance of the match when seen from Kosovo's capital Pristina.

For Valon Behrami's uncle Qaush, his nephew will have a “special motivation for victory” on Friday, because his parents suffered while Kosovo was Serbia's province.

“They both lost their jobs and father was persecuted,” Qaush Behrami said.

Agon Xhaka, a 22-year-old football player, said the father of his cousin Granit was in a prison during the regime of late Serbian strongman Slobodan Milosevic and that the “family emigrated after he was released.”

Like tens of thousands of others, during the 1998-1999 war between Kosovo ethnic Albanian pro-independence guerrilla and Serbian forces, the families of Behrami, Xhaka and Shaqiri took refuge in Switzerland.

There are no official figures, but an estimated 200,000 Kosovo Albanians live in Switzerland, a striking number when compared with Kosovo's 1.8 million inhabitants.

Along with the community living in Germany, they make up one of the main sources of income for Kosovo, sending around 175 million Swiss francs (€152 million euros, $176 million) back every year.

This emigration dates back to before the Kosovo war.

Kosovo Prime Minister Ramush Haradinaj also lived in Switzerland, working as a bouncer and karate instructor before retuning to Kosovo and becoming one of the pro-independence guerilla leaders.

The last of the conflicts that accompanied the collapse of Yugoslavia claimed some 13,500 lives. More than 10,000 of the victims were Kosovo Albanians.

The war ended when NATO bombing forced Milosevic to withdraw his troops.

Less than a decade later Kosovo declared independence in 2008. Belgrade still refuses to recognise the declaration and is supported by its traditional ally Russia.

Belgrade also goes to great lengths to prevent Kosovo teams from participating at international sports events, but with decreasing success.

But in May Serbia prevented the Kosovo karate squad from entering the country to participate in the European Championships in Novi Sad.

Not surprisingly, Kosovo will be cheering for Switzerland.

“The whole of Kosovo will be in front of TV screens, cheering for the victory against Serbia,” teacher Daut Maloku, 46, told AFP.

“When Switzerland plays it is the same as when Kosovo does,” assured  Qahil Halili.

“Switzerland is the third squad we have, after Kosovo and Albania,” said Halili, a municipal employee from Zhegra, where Shaqiri was born.

A hamlet in eastern Kosovo is known as a “little Switzerland” as 450 families have relatives there.

It only adds to the occasion that the winner of the match will be in a strong position to qualify for the knockout stage.

“It further enhances the drama around the match,” Sekiraqa said.