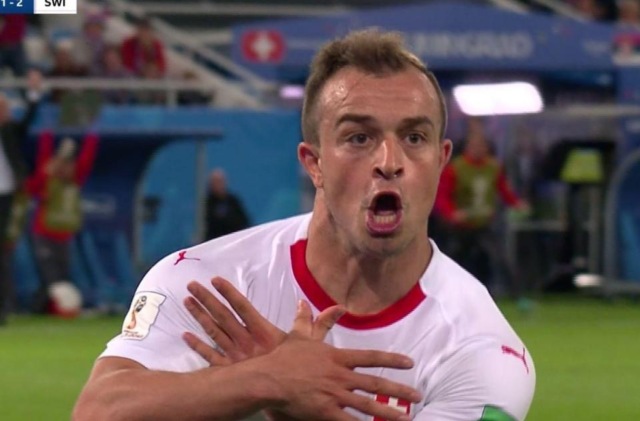 The day after the comeback win which gives Switzerland a strong chance of making it to the next stage of the tournament in Russia, a lot of the attention has focused on Xherdan Shaqiri and Granit Xhaka.

Both players, who have a Kosovo Albanian background, celebrated their goals by making a hand gesture representing the “double eagle” of the Albanian flag.

The use of the Albanian “crossed hands” symbol, which is also used by the Albanian football team to celebrate goals, could be read as a provocative act given Kosovo was a former province of their opponents Serbia – a country which has never formally recognised Kosovo’s independence and which has attempted to prevent the fledgling nation from competing in sport at the international level.

#Switzerland captian says he sees no problem how his fellow teammates celebrate goals. Double eagle or not, egal! https://t.co/hqgXZYTT2x

But Shaqiri, who was booed constantly by fans of Serbia throughout the match, put his use of the Albanian gesture down to the heat of the moment.

Xhaka, who kicked off the Swiss resurgence with his goal in the 52nd minute, also made the “double eagle” gesture after scoring. His father, an ethnic Albanian, was imprisoned in Serbia in the 1980s.

“The ‘double eagle’ was not a message to the opponents: I didn’t give a shit about that. It was a message for all the people who have supported me and stayed by me. A greeting for the people in the country where my parents come from,” said Xhaka after the victory against Serbia.

Shaqiri and Xhaka were also backed by Swiss captain Stephan Lichtsteiner. “I don’t think people in Switzerland have a problem when they celebrate like that, because we know they are dual citizens,” he said.

“In the run-up [to the game] there was a lot of provocation. It was difficult for us Swiss and for the dual citizens it was even tougher. As a captain, I don’t have a problem with it. The opposite. I have spoken with their [Shaqiri and Xhaka’s] fathers a lot about the subject,” said Lichtsteiner, who also appeared to make the “double eagle” hand gesture in a photo published by Swiss tabloid Blick.

“Oh! Double eagle. I don't know what relation Xhaka and Shaqiri have with the commune of Wittnau in Aargau have but it's really nice they are celebrating their commune!

But Swiss coach Vladimir Petkovic was unenthusiastic about the celebrations.

“You should never mix politics and football, it's good to be a fan and important to show respect,” he told reporters after the game.

“It's clear that emotions surface. I think on and off the pitch we need to steer away from politics in football and we should focus on this as a sport that brings people together.”

In an opinion piece, Tages Anzeiger said it was understandable that Shaqiri and Xhaka had feelings for the country of their parents but called their celebratory hand gestures “stupid” and “unjustifiable” given the “provocations and incitements between Serbs and Albanians in relation to Swiss with an Albanian background before the match.”

Meanwhile, Blick newspaper described the gestures as “dumb and unnecessary” and described them as the “great stain” on a “wonderfully stirring evening”.

NZZ described Shaqiri and Xhaka as the Switzerland’s two most talented footballers of their generation but said they “should have let the football speak for itself”.

They said the two players’ “political sensibility and social awareness were undeveloped” and that they should have followed the lead of the national coach “who ignored all political undertones” to the match.

The newspaper also said the “nationalist” gestures had reignited a debate about cultural divisions within the Swiss football team which appeared to have been put to bed in 2014 when Swiss football authorities said such gestures would not take place in future.

It also noted, however, that this debate about the Swiss football team was far from dead and buried: recently, conservative Swiss magazine Weltwoche described the team as “a seasoned group of mercenaries with a very Balkan touch, advantageously complemented by several ‘Helvetised’ Africans.’

On social media, the debate under the hashtag #doppeladler has veered between support between for the two footballers and condemnation of their actions. But there have also been plenty of calls for the whole issue to be quietly put to bed.