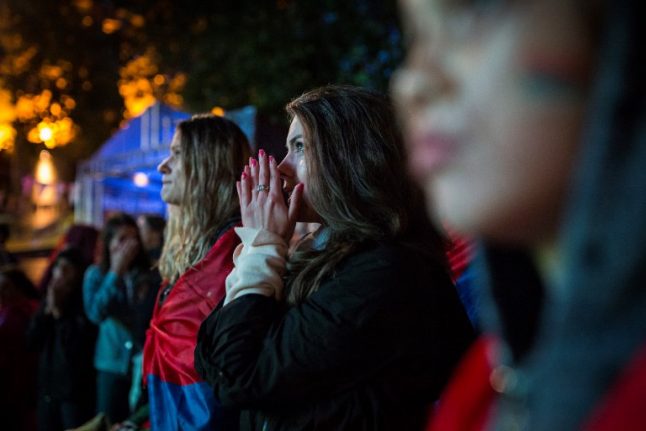 Both Shaqiri and Xhaka come from ethnic Albanian families from Kosovo, a former Serbian province, a fact that stoked tensions before and during Friday's clash.

Stoke City's Shaqiri was born in Kosovo while Xhaka was born in Switzerland to a family from Kosovo.

Both players pointedly celebrated scoring by making a double eagle gesture with their hands representing the Albanian flag, viewed as a symbol of defiance.

The two “celebrated their success with a 'black eagle' sign of people who believe in the idea of the so-called 'Greater Albania',” the online version of the Blic paper commented.

It said Xhaka “shamefully provoked our fans. After making a 'double eagle' gesture clearly alluding to his (ethnic) Albanian origins, he was running on the pitch trying to attract the attention of the cameras”.

The Telegraph paper criticised the “provocative Albanian gesticulation” while the Vecernje Novosti, under the headline “Provocation of the Swiss”, featured a large photo of Shaqiri's boots.

The Serbian Football Federation had complained over Shaqiri's boots ahed of the match but without success, state-run television RTS reported.

“We sought that he changes the boots. It was a provocation, we were playing against Switzerland, not Kosovo,” official Jovan Surbatovic said.

Meanwhile, papers in Kosovo praised the “extraordinary performance” of the two players with ethnic Albanian origins.

“The gesture of Xhaka and Shaqiri causes hysteria in Serbia,” the Zeri paper commented.

Kosovo President Hashim Thaci tweeted his congratulations to the two scorers and the entire Swiss team on a “well-deserved win. Proud of you! Kosovo loves you!”.

“Why provocative? It's a symbol of the Albanian flag. They (players) used to be Kosovo Albanian refugees,” he said on Twitter.

Kosovo declared independence in 2008, less then a decade after the 1998-1999 war between ethnic Albanian guerillas and Serb forces, but Belgrade – backed by its traditional ally Russia – still refuses to recognise the move.