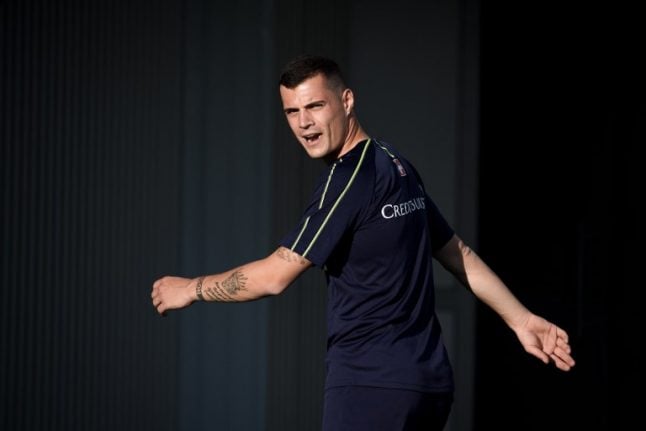 Arsenal midfielder Xhaka and Stoke City's Shaqiri trace their roots to Kosovo, a former province of Serbia where thousands were killed and tens of thousands more chased from their homes during a 1998-1999 conflict between Serbian forces and ethnic Albanian guerillas.

The double eagle symbol represents the Albanian flag and is viewed as a symbol of defiance in Kosovo, which declared independence in 2008 in a move that Serbia still refuses to recognise.

The players' celebrations in the 2-1 win over Serbia on Friday caused outrage in Serbia.

Fifa rules prohibit political symbols in stadiums and the three playfiers could have been banned.

But Fifa said it was imposing the fines “for unsporting behaviour contrary to the principles of fair-play”.

Serbian Football Association president Slavisa Kokeza and Serbia coach Mladen Krstajic were each fined 5,000 Swiss francs for comments they made after the match.

Krstajic told Serbian journalists that German referee Felix Brych should be tried for war crimes in The Hague for failing to award his team a penalty.

The Serbian FA was also fined 54,000 Swiss francs for the behaviour of fans during the game – they displayed discriminatory banners and messages and threw objects.

Switzerland and Serbia can both still qualify for the last 16 of the World Cup. The Swiss face Costa Rica on Wednesday, when Serbia play Brazil.