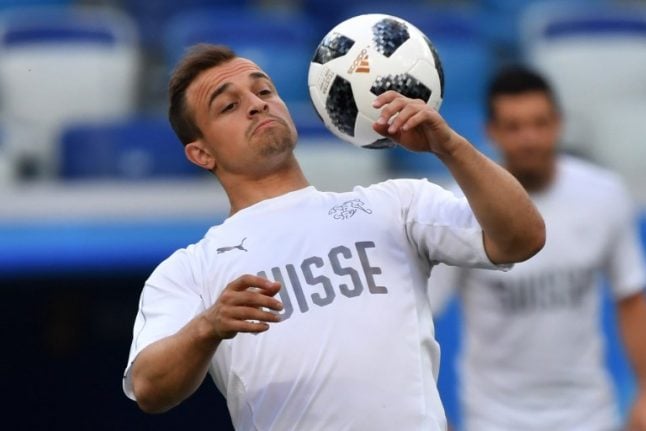 Arsenal midfielder Xhaka and Stoke City's Shaqiri trace their roots to Kosovo, a former Serbian province with an ethnic Albanian majority where thousands were killed during a 1998-1999 conflict between Serbian forces and ethnic Albanian guerillas.

The double eagle symbol represents the Albanian flag and is viewed as a symbol of defiance in Kosovo, which declared independence in 2008 in a move that Serbia still refuses to recognise.

The players' celebrations in the 2-1 win in Kaliningrad on Friday caused outrage in Serbia.

Albanian Prime Minister Edi Rama on Tuesday opened a bank account to enable his fellow countrymen to help pay the fines of Xhaka and Shaqiri, which he labelled “absurd”.

The account named “Don't be afraid of the eagle” is a “gesture of gratitude to the two sportsmen” he said on Facebook, voicing regret over misinterpretation of what he described as a sign of spontaneous joy.

A total of $25,614 had been collected as of 8.15am on Wednesday after an online fund was launched in Kosovo.

A screen grab of the campaign home page on the gofundme site.

Kosovo Commerce and Industry Minister Bajram Hasani said he had donated €1,500 euros, which is his monthly salary.

“Money cannot buy the joy that Granit Xhaka and Xherdan Shaqiri brought us by celebrating with the eagle sign their goals during the Switzerland-Serbia match.”

Switzerland and Serbia can both still qualify for the last 16 of the World Cup.