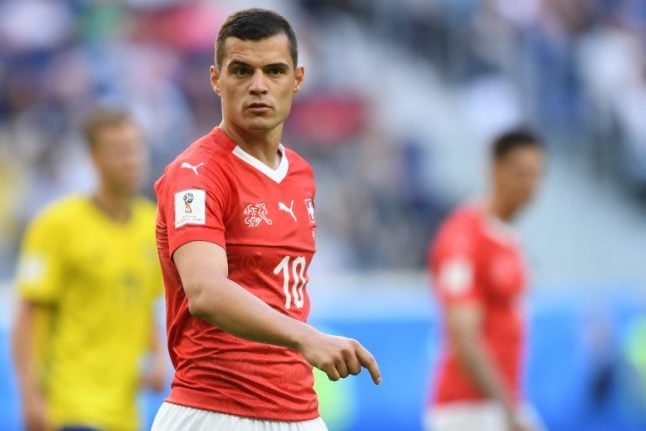 Granit Xhaka is just one of the Swiss national players with a migrant background. Photo: AFP

The ongoing debate in Switzerland over whether the Swiss football team is ‘Swiss enough’ has been given unwanted new life by a key figure in the sport’s national federation.

“Maybe it should be asked: do we want dual nationals?” said the federation’s general secretary (SFV) Alex Miescher in a recent interview with the Tages Anzeiger newspaper.

The comment came after three Swiss footballers, including Granit Xhaka and Xherdan Shaqiri who have a Kosovo Albanian background, celebrated goals scored against in a World Cup match against Serbia with a hand gesture representing the “double eagle” of the Albanian flag.

The gesture divided the increasingly international Swiss public, many of whom are dual nationals.

Some supported the players whose families had come to Switzerland during the 1998-1999 war between Kosovo ethnic Albanian pro-independence guerrilla and Serbian forces. Others, meanwhile, said it showed that the players loyalties were divided.

The controversy appeared to die down but the comments from SFV general secretary Alex Miescher have escalated the situation.

“The incident with the double eagle shows there is a problem,” said the federation’s second in command, suggesting only players who gave up their second nationality should be entitled to participate in trainee programs.

Although these comments were authorised by the SFV, the federation backtracked on Saturday. In a statement, it distanced itself from the debate by saying no one within the SFV had spoken out against dual nationality.

But it appears the damage has already been done. With around two thirds of the Swiss national team having a foreign background, and many having dual nationality, the comments have been greeted with anger.

“I hear in his [Miescher’s] words that he doesn’t trust dual nationals to give their all for Switzerland,” said Granit Xhaka in an interview published in the Blick newspaper.

“Just after we experienced a tough defeat in Russia, you don’t do that,” he said.

“We are all Swiss and give everything for the Swiss national team – all of us, because we know, and are thankful for, everything Switzerland had done for us and our families,” he said in response to what he described as “Stone Age commentary” by the SFV general secretary.

Miescher’s comments are unlikely to put an end to ongoing debate about the status of the Swiss football team, often attacked by conservatives as being too foreign.

The comments are also part of a larger debate over dual nationals in Switzerland.

While more than one in five Swiss citizens now holds a second passport – a number that has soared 40 percent to 1.48 million in the last decade – members of the conservative Swiss People’s Party have periodically called for the right to dual nationality for Swiss people to be either limited or scrapped, arguing that the holding of two passports can mean reduced loyalty to Switzerland.