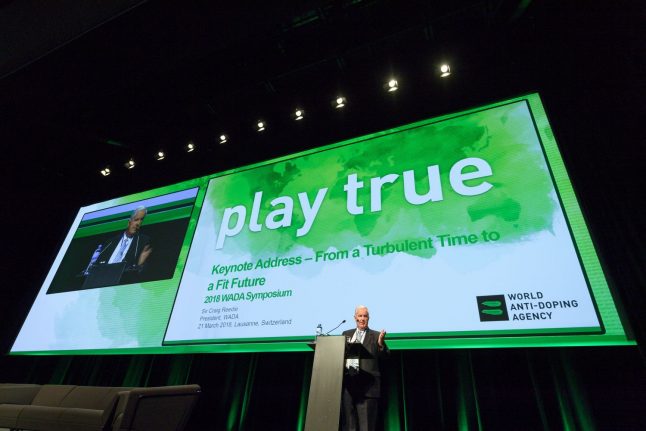 World Anti-Doping Agency President, Craig Reedie, addresses the assembly at the opening of the 2018 edition of the WADA Annual Symposium on March 21, 2018 in Lausanne. Photo: Fabrice Coffrino/ AFP.

The agents, arrested by Dutch intelligence services earlier this year, were implicated in a planned attack on the Spiez laboratory in Bern, which was investigating the poisoning of Russian double agent Sergei Skripal in Britain, according to Swiss officials and media reports.

The Swiss attorney general's (OAG) office told AFP on Saturday that the same two individuals have separately been under criminal investigation since March 2017 “due to a cyber-attack against the World Anti-Doping Agency.”

“The proceedings are being conducted on suspicion on political espionage,” an OAG spokeswoman, Linda von Burg, told AFP in an email.

She confirmed that the individuals linked to the alleged hack at WADA's Swiss office “are those affected by the operation mentioned by the Federal Intelligence Service,” in connection with the Spiez laboratory attack.

The attorney general has asked Switzerland's justice ministry for permission to prosecute the individuals over the WADA incident, von Burg said.WADA declined to comment.

Tensions between Russian and WADA have been elevated for several years. The Montreal-based watchdog suspended Russia's Anti-Doping Agency (RUSADA) in 2015 after declaring it to be non-compliant following evidence of a vast plan backed by Moscow to cheat at the 2014 Sochi Winter Olympics.

On Friday, WADA announced that its independent Compliance Review Committee had cleared RUSADA to be reinstated.

Russia has admitted shortcomings in its anti-doping programme but has rejected the existence of a state-supported cheating programme.

Foreign Minister Sergei Lavrov also condemned Friday's reports that Russian agents targeted the Spiez laboratory, saying he could not believe the arrests would have not been picked up at the time by the media.

The agents, believed to be working for Russia's GRU military intelligence, allegedly targeted the laboratory analysing data related to poison gas attacks in Syria, as well as the March 4 attack using the nerve agent Novichok on Russian double agent Sergei Skripal and his daughter in Salisbury in southern England.

The laboratory does analytical work for the Hague-based Organisation for the Prohibition of Chemical Weapons (OPCW), the global chemical arms watchdog.

Exact details of the alleged agents' arrest are unknown.

But on March 26, Dutch Prime Minister Mark Rutte announced that his cabinet had decided to expel “two Russian intelligence workers from the Russian embassy” as a result of the Skripal attack, without giving further details.